Everyone has a bucket list. Well, at the very top of mine is a visit to New Zealand. I have been in love with New Zealand ever since I saw the Lord of the Rings movies. It was an easy choice choosing New Zealand for this month’s #WinePW. I did some research on the area and one fact that totally blew my mind was that only 5% of NZ’s population is human- the rest are animals. I’m just thankful that some of the five percent make wine.

New Zealand is synonymous with diversity. While visiting, you can explore active volcanoes or go spelunking. You can choose to take walks along beautiful beaches or ski down incredible slopes. Thanks to New Zealand’s long history of isolation and divergent evolution, the fauna and flora are as equally diverse as its topography.

Evergreen forests cover approximately two-thirds of the surface are of the islands and almost nine-tenths of the indigenous plants can be found only in New Zealand. But what really intrigues the biologist in me is the fact that when the original inhabitants arrived in the 13th century, there were not many animals on the islands. In fact, there were only three types of reptiles: skinks, geckos, and the tuatara, which has been extinct in other areas for over 100 million years!

New Zealand is located more than 1,000 miles southeast of Australia and actually embodies two main islands – the North and South – as well as numerous smaller islands that can be over a hundred miles away from the main islands. Both the capital city of Wellington and the largest urban city of Auckland are located on the North Island.

There are 11 distinct wine regions throughout New Zealand with the majority of them being found on the east coast of the two islands. The soils throughout the two islands are often lacking in nutrients and variable. The majority of the soils are sedimentary rock and clay. However, along the rivers it is typical to find alluvial soils. In most parts of the country, daytime highs in summer are above 70 °F (21 °C), occasionally exceeding 80 °F (27 °C) in the north, while winter daytime highs throughout the country are rarely below 50 °F (10 °C).(britannica.com) To explore each of the regions in more depth, please visit New Zealand wines’ website.

The first generation winemaker and owner Simon Waghorn along with his wife, Jane met studying at Canterbury University. Simon worked at a wine shop and was a member of a wine club while he was pursuing his degree.

These experiences initiated Simon’s love of wine, so after graduation, he began working in wineries to see if wine was indeed his calling. After confirming that he wanted to pursue a career in winemaking, he attended Roseworthy College wine school. Simon traveled to Barossa Valley to begin his winemaking career, and then continued on to Waikato and Gisborne in New Zealand.

While in Gisborne, a new opportunity presented itself in Marlborough. Once again Simon, Jane and their three daughters moved in the pursuit of wine. Soon after beginning this job, the Astrolabe label was born. Throughout the years, Jane continued working in the education field, until Astrolabe grew in size. Today, she runs the dayd to day workings of the company, while Simon does the winemaking.

Dedicated to producing sustainable wines, Astrolabe is like many of the wineries in New Zealand. All of their vineyards, the winery itself and even the bottling line are certified under the Sustainable Winegrowing New Zealand program. Watch this video to learn more about this program that is truly at the heart of New Zealand’s wine making industry.

Local ingredients are the key to New Zealand cuisine. With its isolation, they rely heavily on the agriculture that they grow and what they catch from the sea. Australia, European, American and Southeastern Asia have a large influence on New Zealand cuisine. The original inhabitants of the islands, the Maori, also heavily influence the dishes that are on the dinner plate.

Kumara, a root vegetable most commonly grown in the Northern most part of the North Island, is a main ingredient in the Kiwi’s diet. Although kumara is actually red and purple and supposedly quite different than a regular sweet potato, I took writer’s liberty and decided to make a sweet potato dish for the pairing.

Meant to be a side dish, the recipe sounded too delicious. In my eyes, it was worthy of a main dish. The Cheesy Sweet Potato Casserole recipe was found on Delish. I added some Vidalia onion and instead of arranging the pieces like I would a Ratatouille, I just lied them flat within the baking dish.  I have to say, it was delicious! 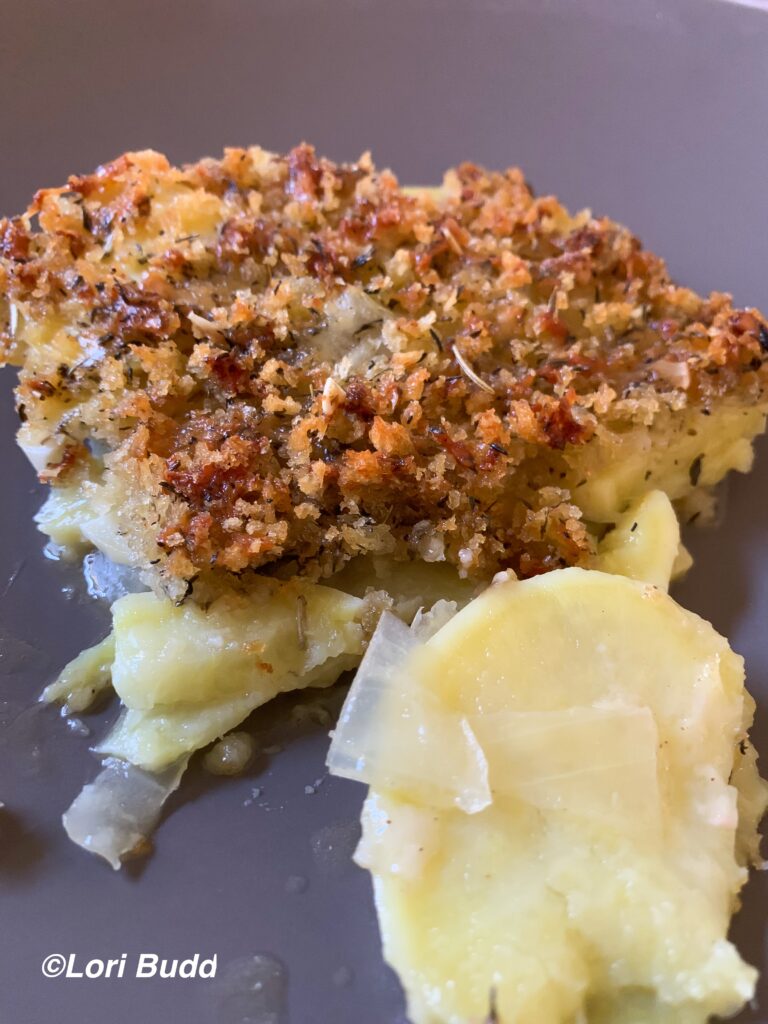 Aside from it being 105 degrees outside and the need to bake the dish for almost an hour, it was simple to make. The earthy and nuttiness of the Gruyere cheese paired nicely with the wine, bringing out the earthiness of the Pinot, while the Vidalia onion balanced the wine a bit and allowed the flavors increase in presence.

If you would like to learn more about New Zealand wines and see some amazing recipes to pair with them, my friends at #winePW will be chatting it up on Saturday, August 10th on Twitter at 11am ET. In the meantime, check out Astrolabe’s website in order to purchase their wines.
If you can’t join the chat, don’t worry, you can learn all about the wines by reading my friends posts. I guarantee there will be amazing food pairing suggestions that will make your mouth water.

Our host for this month, Lori of Exploring the Wine Glass, is thankful that Humans May Only Be 5%, But They Make Great Wine #WinePW

What is Biodynamics I don’t know about you, but I was under the impression that Biodynamics was relatively a new concept. But it has been around for quite some time.  It is an approach to agriculture that was developed by a philosopher named Rudolf Steiner (1861-1925.) In addition to creating Biodynamics, he is also the…