Ask someone what Champagne is and most people will be able to answer you. However ask what Prosecco is, and you get that dazed and glazed look. People are more familiar with Champagne than Prosecco.  Don’t worry, I’m here, with the assistance of #WineStudio and Nino Franco, to help you become loco for Prosecco.

Prosecco is actually another name for the grape variety Glera.  In order to be classified as Prosecco, the wine must be composed of  a minimum of 85% Glera. Pinot Bianco, Pinot Grigio, Perera, Verdiso, and Bianchetta Trevigiana can be used for the additional 15%. Chardonnay and Pinot Nero can also be used. The area allowed to produce Prosecco has been enlarged to Slovenian border around 60 miles further east than original zone.

Differences Between Champagne and Prosecco

Glera was originally known as Prosecco. The name Glera, came about to help alleviate confusion between the grape and the town and DOC of Prosecco.  Glera, an Italian indigenous variety, is a parent variety of two red grape Manzoni varieties. A natural crossing with Cabernet Sauvignon gave rise to Incrocio Manzoni 2.15 and Incrocio Manzoni 2.14 was produced when it crossed with Cabernet Franc.

Glera grapes are thin-skinned and are found in huge clusters.  The large amount of terepenes found within the grape provide the tell-tale aromatics of Prosecco. Glera is a cool climate vine and is fairly hardy and productive. It is considered to be a late ripening variety and requires a long hang time in moderately dry, hillside microclimates. You can expect wine that is high in acid and low in alcohol.

Who is Nino Franco?

Nino Franco’s story begins in 1919 when Antonio Franco founded “Cantine Franco” winery located in Valdobbiadene, a province of Treviso, Veneto, Italy. Located just below the Alpine-Dolomite areas of Veneto, Valdobbiadene provides an ideal climate for a cool grape variety Glera and is home to the highest quality Prosecco.

Being one of the oldest wineries in Valdobbiadene, Nino Franco holds true to its tradition. A combination of old practices and adapting to new technologies has allowed three generations Antonio, Nino and Primo to produce exceptional Prosecco.

Antonio founded it, Nino expanded it and Primo improved the company performance throughout the years. 1982, when Primo took over its management, was the turning point.

Primo, the 3rd-generation producer for the winery is considered the architect of the Prosecco revolution worldwide! In many ways, he did what Angelo Gaja did for Peidmont and Pierro Antinori for Tuscany.~ Tim Clark

A Month of Prosecco

Rustico is connected to the old local tradition of making wine using short second fermentation in the bottle and leaving he sediments in the wine. Although no longer the technique, the name has remained and is considered to be the brand name.

This Brut is made from 100% Glera grapes in the Charmat Method. Harvested in cold climate and medium altitude, traditionally the wine was originally re-fermented in bottle, in the Spring when the weather was warmer. This is where the term “rustic” was derived. Rustico is the historic name of the original method used to make Prosecco, where the second ferment takes place in bottle. 4000 cases were produced.

The vines producing fruit for this wine are found on high hillside vineyards. During our conversation on Twitter, we learned that work in the hillside region requires 800 hrs/hA/per vintage, whereas on the valley floor only 120 hrs is required. How’s that for a fun fact?

There are only 15 towns within one province that have been deemed Prosecco DOCG, while there are 556 towns, 9 provinces and 2 regions that have DOC classification. What does this mean? Well, it means that when you are walking in your local wine shop to choose a quality Prosecco, be sure to look for DOCG!  All of Nino Franco wines hail from DOCG. 6000 cases were produced.

There were two major differences between this wine and the previous ones. The first was observed prior to opening the bottle. It is a vintage wine and has been produced for the last 32 years. The second became obvious after I removed the foil. Instead of the typical cage we are used to seeing on Sparkling wines, there was a metal clasp!

I must admit I was a bit surprised to see this. It was definitely something I’d never seen before. I had to reach out to my winestudio friends and ask what I was supposed to do! Thankfully, Tina supplied us with this video of Tim Clark demonstrating how you open an agrafe. Nino Franco has been using this closure since 1983.

The wine is always harvested from the same parcel of vineyard located on the steepest (1640 feet elevation) hills of Valdobbiadene. Although classified as a dry wine, this was the sweetest of the three we had containing 30-32 G/L sugar. Primo has 0 sulphites added and no racking after 1st ferment – stays on its lees adds texture and complexity. Although the grape selection is important, the sweetness levels determine the classification: Brut is the driest, then Rustico, and Primo is the sweetest. (Of the four we tasted, I actually perceived the Rustico as the driest.) 4000 cases produced.

Another week and another vintage Prosecco! A 2010 Brut disproving the myth that Prosecco can’t be aged. This wine came wrapped in a lovely yellow foil. Fruit for this wine are sourced from the “Grave di Stecca” vineyard. A clos on the slopes of Prealpi, just near the town center. The vines are exposed to the south and are shaded by a park. Of all the wines we tasted in the lineup, this wine spent the most time in bottle before release. The 1st wine aged 6 months on the lees, then after second ferment in autoclave for another year and half.

This would be a 100% DOCG, but it’s not labeled as such and is so different from typical Prosecco that the government didn’t recognize it as such, so Primo decided to label it “Spumante.” The Grave has been produced every vintage since 2009. 4000 cases produced. 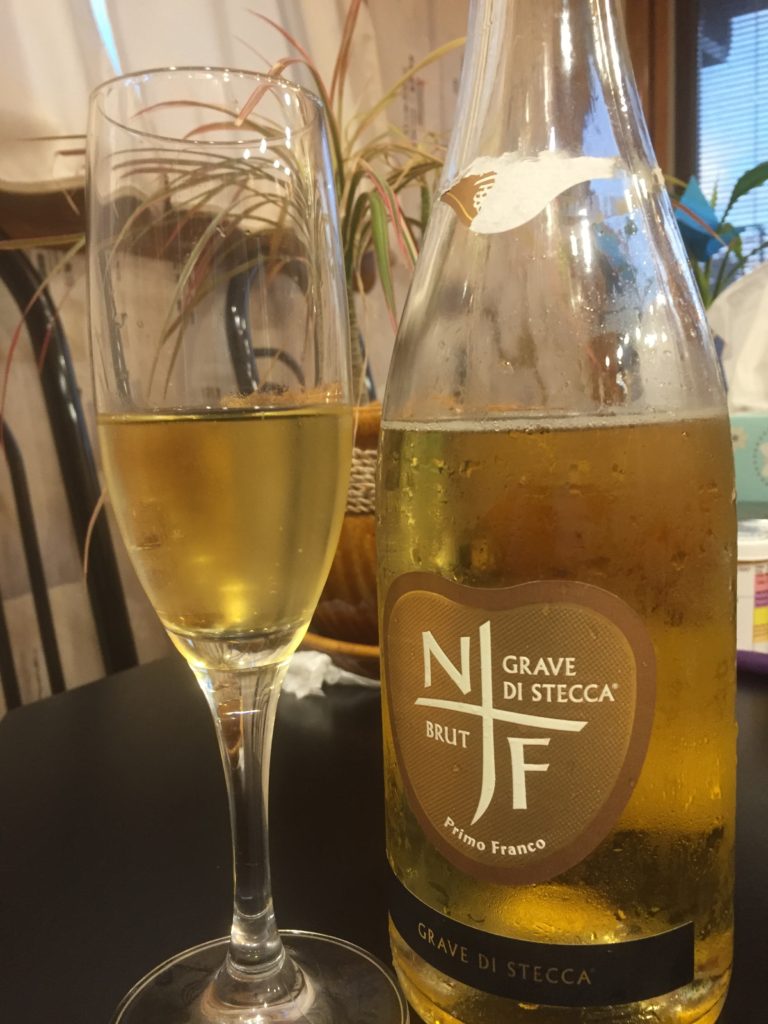 Thank you to Tim Clark, National Wine Educator at Terlato Wines, Tina of #WineStudio and of course Nino Franco winery for an exciting, eye-opening month of Prosecco. It was quite the educational experience.

Disclosure of wine sample submission:  I received this wine at discounted cost from Nino Franco and  Wine Studio. I was not required to write a positive review and the opinions I have expressed are entirely my own.

4 thoughts on “Getting Educated on Prosecco by Nino Franco”