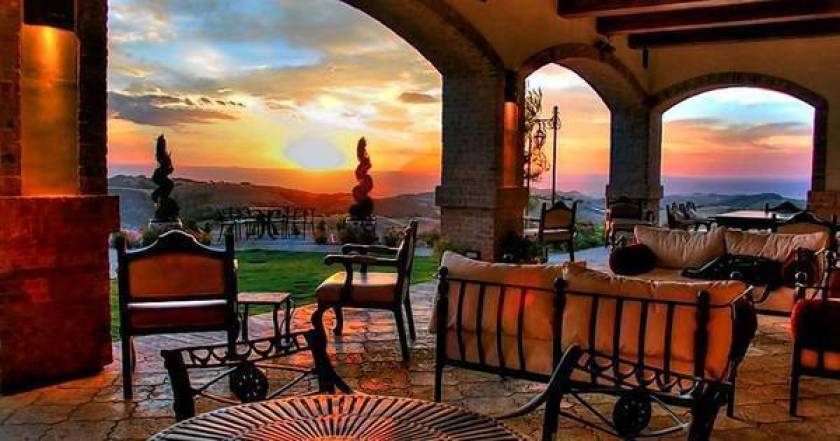 Located 2,200 feet above sea level sits a mountain with astonishing views.  A 212-acre hilltop filled with calcareous clay soils and limestone subsoil. The Pacific Ocean, a mere 14 miles away, adds to the remarkable microclimate and cools the vines that are planted at an incredible 56% incline. It is here, in the Adelaida district on the West side of Paso Robles, where you find Daou Vineyards; Paso Robles’ version of the Right Bank of Bordeaux.

“I think sometimes the stars align whether we want them to or not. And we’re drawn to certain people and places for no other reason than…Destiny.” ― Morgan Parker

It may have been just that, destiny, that brought Daniel and Georges Daou to Paso Robles. You may have thought they would have settled in Bordeaux after selling their software company in order to begin a winery with the objective of creating spectacular Cabernet Sauvignon. If not Bordeaux, then Napa Valley would be the next obvious choice, wouldn’t it? But fifteen years ago, the Daou brothers didn’t settle there, they came to Paso Robles to fulfill their dream.

Daou Mountain isn’t just any mountain planted with vines.  The land was originally planted in 1964 by André Tchelistcheff, who was known as “the Maestro” and is a legacy in Napa Valley history books. It was he who led the way for winemakers understanding the importance of terroir expression. At Beaulieu Vineyard, André designed a cool room for white fermentation and instituted malolactic fermentation as standard practice for red wines.

Hoffman Mountain Ranch, which is what it was known as previously, was the first commercial winery in Paso Robles and was known for producing quality wine. When Georges and Daniel came looking for the consummate land for Cabernet, they found it at Hoffman Mountain Ranch. Without vines, power or water, they knew they had found perfection. “We have, arguably, the most perfect climate in the world to ripen Bordeaux varieties and Cabernet Sauvignon.” Daniel Daou

Soul of a Lion is the crown jewel of DAOU, and an emblem of our quest to produce unsurpassed Cabernet Sauvignon from the terroir of DAOU Mountain.

When the wages of war suddenly darkened their doorway, they lost everything – except their abiding love for one another. Embattled but unbroken, they were sent on a journey across the old world and into the new, all under the wing of their devoted father. He taught them persistence, perseverance, passion and courage; the mettle not just to survive, but to dream. With that, their journey became a pursuit, until it finally led them to a great mountain. And it was here that everything they lost became whole and beautiful again. This is the the story of Soul of a Lion.

Soul of a Lion is brothers Daniel and Georges’ tribute to their father. 75% Cabernet Sauvignon, 15% Cabernet Franc 10% Petit Verdot. This wine is representative of the strength and courage that their father, Joseph, instilled in them. The wine is aged for 22 months in a proprietary Daou 5-Year barrel, made from a rare fine-grain pink oak known as Bois rosé. Filled with enticing aromas of lilac and violets and almost an intoxicating spice, it is understandable why it has received 96 Points in Wine Enthusiast, 96+ points from Jeb Dunnuck and 94-96 Points, Robert Parker before  I even tasted it.  After sipping I doubted why it didn’t receive more. Flavors of blueberry, plum and chocolate cherries lead up to an outrageously long finish. It’s a young wine, decant it and let it open and your patience will be rewarded.  For Daniel and Georges, “Soul of a Lion is A Dream Fulfilled.”

You can purchase Soul of a Lion and find out more about Daou Vineyards and their other wines on their website.

Welcome to the next installment of WWHBD. If you have been following us, you know this is a bi-monthly post about What We Have Been Drinking. As in previous posts, since we are true believers of “Drink what you like and everyone tastes differently,” rather than including our tasting notes, I have included basic information about each…