Global warming. Let’s get real.. It is happening. But long before anyone termed the phrase, glaciers were melting and began to migrate. These glacial movements left us with some of the most beautiful regions of the world. One such region is the Finger Lakes in New York.

Millions of years ago, the glaciers traversed their way south through what we now call New York State.Click To Tweet In their wake, they left massive trenches, leaving behind streams, rivers and long narrow lakes with deep gorges. These lakes now play a crucial role in the quality of grapes that are growing in the Finger Lakes.

The Finger Lakes consist of fourteen counties that offer excitement for any traveler. Throughout the year you are welcomed by wineries, breweries, ski resorts and hiking trails. There is so much to do, no matter the season, that it is worthy of multiple trips to experience all it has to offer. Within these fourteen counties lies eleven lakes; Canadice, Canandaigua, Cayuga, Conesus, Hemlock, Honeoye, Keuka, Otisco, Owasco, Seneca and Skaneateles. The lakes vary in size and depth. The largest lake, Cayuga is 40 miles long and approximately 435 feet deep. Seneca Lake, just slightly shorter lays claim to being the deepest lake at  618 feet.

Although you can find vineyards around many of the lakes, the majority of wineries are found along the the four largest lakes located in the center: Canandaigua, Geneva, Keuka, Seneca and Cayuga. The smaller lakes have a tendency to freeze and thus lose their effect of the water on the vines.

Although the Finger Lakes make a variety of quality wine, when someone mentions the Finger Lakes to me, my mind immediately goes to Riesling. Located on the Seneca Lake, in the town that rumor has it was named after the famous city in Sweden, lies the town of Geneva. Within the town, with breathtaking views of the lake resides Ravines Wine Cellars.

A match made in heaven, Morten and Lisa Hallgren cover all the bases to making quality wine. Morten is the winemaker, while Lisa is a chef. Their adventure in the Finger Lakes began in 2001, when they opened Ravines. At the time, they were the only winery within the Finger Lakes that had a European trained winemaker. At that time, the Finger Lakes was more known for sweet wines. But Morten saw the potential in the region and declared his mission. He was going to demonstrate that dry, vinifera wines can be made with extraordinary quality in the Finger Lakes.

Growing up on the family’s estate winery in the Côtes de Provence doesn’t sound too shabby to me and that is exactly how Morten fell in love with wine. He grew up learning how to maintain  170 acre vineyard. Meanwhile, Lisa fell in love with the art of cuisine while spending time at Castel Roubine.

After obtaining his degree in Enology and Viticulture at the Ecole Nationale Supérieure d’Agronomie in Montpellier, Morten advanced his career working at Chateau Cos d’Estournel. Deciding to make the change to America, Morten began working at Cordier Estates in West Texas, followed by the Biltmore Estate in North Carolina. But it wasn’t until he came to to work for, no other than, Dr. Konstantin Frank Cellars, that he realized he found the golden ticket in the Finger Lakes.

With his goal to produce “very dry, focused, mineral-driven style wines,” Morten and Lisa purchased a parcel in 2001. Using his experience and knowledge of the vineyards, Morten purchased fruit from the Argetsinger and 16 Falls Vineyard on the eastern edge of Seneca Lake to produce wine for their inaugural vintage. (this fruit is still purchased to this day)

The Success of Dry Riesling

Ravine Wine Cellars functions under the  “Transparent Winemaking” concept. They understand that wine making is NOT just making quality wine, but making that wine while remaining good stewards of the land. They produce their wines using sustainable farming to limit the erosion and meticulously maintain their vines to remain in balance while having an understanding and practicality use of organic practices.

These practices have paid off over the past twenty years. Since Ravines Wine Cellars has been named to the Wine & Spirits Top 100 Wineries, Wine Spectator Top 100 Wines, and the Top 20 Wines, Best U.S. Riesling by the New York Times.

When it comes to paring a Riesling with food, we always hear the same suggestions. Chinese food, Cajun cuisine, cilantro seasoned dishes, roasted pork or duck. The typical seafood dishes or Thai food. But while I was scouring the web for a something out of the ordinary, I found a site that recommended pairing a Riesling with cream- or oil-based sauces.

That was a new one to me. But since I never claim to be the master of food pairings, I figured I would give it a try. I made a baked creamy pasta dish with spinach and sausage. 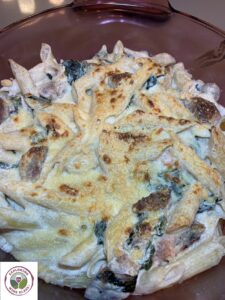 The pairing was interesting. The cream in the dish cut through the acid in the wine, making the Riesling a much fuller bodied wine. It also increased the apricot flavor.  The parmesan in the dish brought out more of the petrol and earth within the wine. After I tasted the dish initially, I added some Cholula sauce which once again changed the wine. The acidity that was lost in the original dish returned, but not to the level that the wine by itself provided. Overall, although not a stereotypical pairing, the wine did make the cream dish feel lighter and in a weird way did pair well. But, in my honest opinion, this wine is too good to not just enjoy on its own.

Ravines Wine Cellars produce a total of four Rieslings that have all received 90+ points in magazines such as Wine Advocate, Wine Enthusiast, Wine Spectator, Wine & Spirits and Decanter. They have two tasting rooms, one in Seneca Lake and one in Keuka Lake. Both tasting rooms are open for tasting by appointment only.

In addition to their award winning Rieslings, you must give their Pinot Rosé a try! Made in the saignée method, they bleed off some of the free run juice that has had contact with the Pinot skins and seeds. The fruit for this wine comes primarily from the Argetsinger vineyard and was names one of VinePair’s  “9 Wines for Thanksgiving 2020.”

You can find out more about Ravines and all of their award winning wines on their website.

2 thoughts on “Crafting Exceptional Riesling in the Finger Lakes”