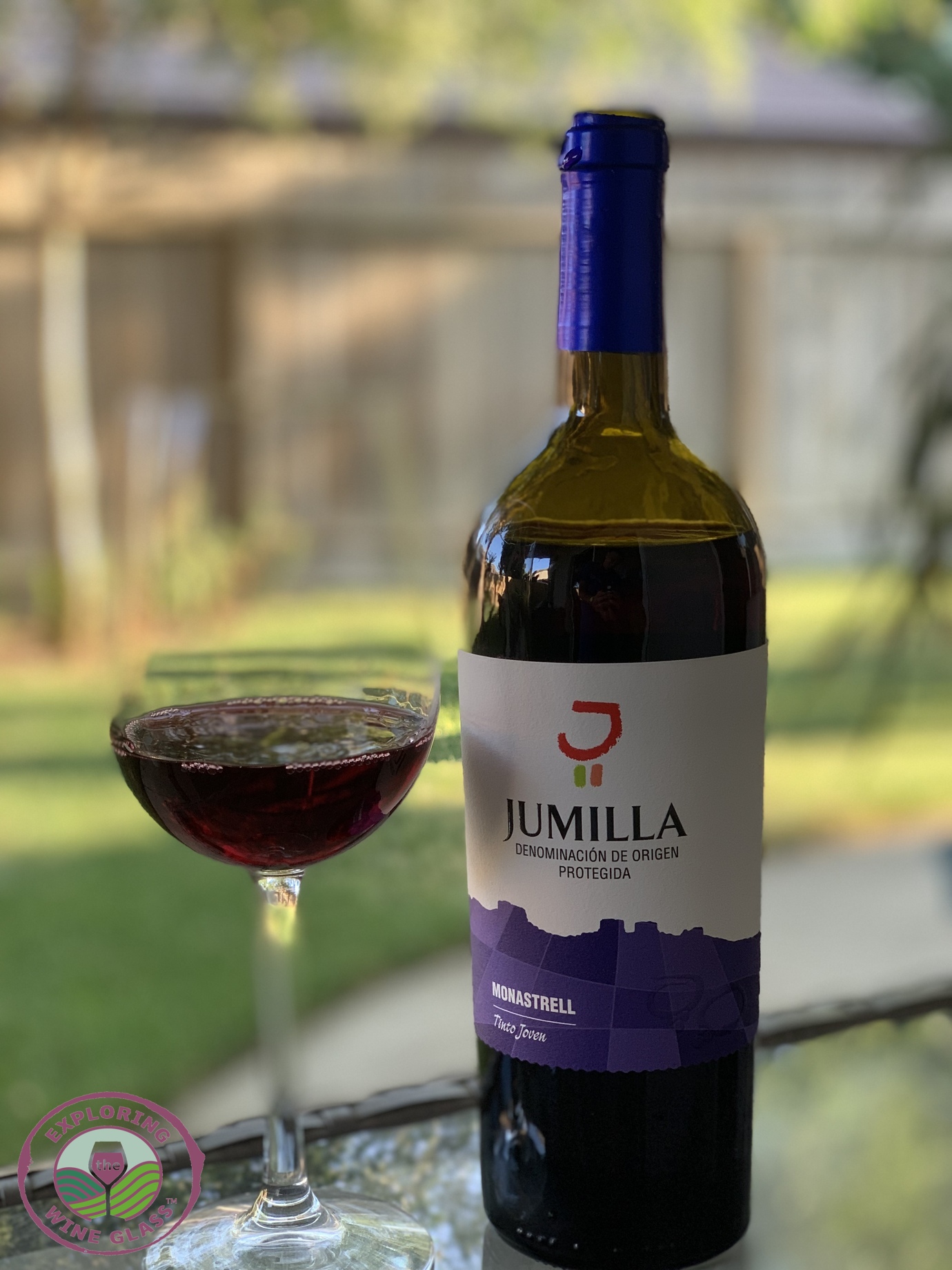 Let’s take a trip… A virtual trip through our wine glass. Pour a glass of Monastrell into your favorite glass, close your eyes and be taken to a small wine region in southeastern Spain. A land where 22,000 hectares of land are dedicated to growing grapes. Travel to where there are only 39 registered wineries and where a small little town contains 40% of those wineries. Welcome to Jumilla. (who·me·yah) 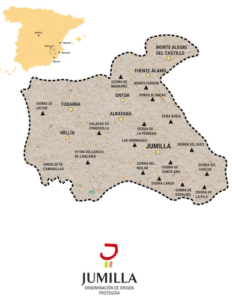 Monastrell, also known as Mourvèdre or Mataro, was born in Jumilla and they have the largest collection of 90+ year old vines to prove it. Located in the south-eastern portion of Fuente-Àlamo, alongside the Segura river and is dedicated to the love of Monastrell.

Monastrell vines are maintained by head trained and are not irrigated on a regular basis even though it is allowed within the DO regulations. This is ideal for the grape which is rather erect, so the vines/clusters do not touch the ground. The vines see spacious separation between each other. The climate is so warm, the head training allows the leaves to protect the grapes from the hot sun. The soils, made mostly of calcaerous, drain extremely well, so the roots need to travel deep into the ground to find the water.

The DO, which is named after the city it is located, is one of the largest and sits at an altitude of 1300 –  2600 ft above sea level. Interestingly, it is one of the very few regions that was not impacted by the Phylloxera epidemic in the 19th century. The region’s flagship grape is Monastrell, of which approximately 85% of the vines are planted.  However, Tempranillo, Garnacha, Syrah, Cabernet Sauvignon and Merlot are allowed within the DO. White grape varieties include Airén, Macabeo and Merseguera. Jumilla is one of the oldest regulated wine regions in Spain.

The Designations of Origin (DO) was created in 1966 and is overseen by the Control Board of the Designation of Origin Jumilla. The Board “shall ensure that the wines protected under this designation are obtained from vineyards located in its area of production and from authorized varieties using cultural practices regarding pruning, plantation density, performance, etc.” The DO itself is comprised of seven towns, of which one is Jumilla. (information from vinosdejumilla.org)

Albatana is the smallest and 50% of its farming population is dedicated to vineyards. (557.51 ha.)

Fuente Àlamo is a town with a very rich historical past, situated in the north of the DO and dedicated almost in its entirety to vineyards and grain growing.  (3,331.98 ha.)

Hellín has been part of the Albacete province since 1833. It has a farming-based economy, although industry and services play an important role in this city, which is the largest of those included within the DO. (1,411.90 ha.)

Jumilla accounts for over 50% of the industry of this city, formerly known as Gémina. The city is the centre of the DO, and nearly all of the bottling plants of the area are located here. (9,189.03 ha.)

Montealegre is an ancient town whose history stretches back over a thousand years. It is located in the north of the DO, and its main source of income is farming, especially on vineyards. (4,582.86 ha.)

Tobarra is also dedicated to farming, and vineyards are part of the day-to-day life of its inhabitants. (2,600.47 ha.)

We are typically use to seeing wine bottles that represent each winery. You see the name of the winery prominently displayed alongside the grape variety. However, Jumilla has done something different with these wines. For the wines that I sampled, there is no winery name, instead the DO is what is noticeable.

In fact, the wines are part of a competition to release wines that are specifically sent to marketing and celebrities. Wineries submitted their wines in hopes to be the representative for Jumilla DO. The idea is that the consumers can taste the wine without the knowledge of the winery it came from. Simply, to enjoy the taste of the region.

Only about four percent of Rosado made in Jumilla. It is definitely a region that loves its reds. In the past, Rosados have been more aligned with the lighter Provence style Rosé but this one is deeper in color and fuller in body, but still an easy to drink wine.  The wine is made via the sangrado (saignée) method.

Bodegas Alceño is one of the oldest producers in the region, having just celebrated their 150th anniversary. It is located in downtown Jumilla. Although they can not grow much because they are within the town limits, they have both entry level and premium level wines. Their rosado is one of the most popular within the region.

Spain has the largest number of organic vineyards than any other wine region. The arid climate and consistent winds make organic farming an integral part of the DNA of the Jumilla wineries. Ninety-five percent of the vineyards within Jumilla itself and 80% in the DO are certified organic. The wine is unoaked, organic, and vegan. Bodegas Xenysel is a small family winery. The name is an homage to the three daughters of the owners. All wines are certified organic. They are located just north of Jumilla, in one of the highest altitude regions. The grapes are grown on un-grafted vines.

This Crianza was aged for 12 months in a combination of 300-liter French oak barrels and foudre (1000 -liter) and an additional 12 months in bottle. The wine is aged separate and then blended prior to bottling. Bodegas Olivares is another winery that has a long tradition within Jumilla. Their history dates back to 1930 when Pascual Olivares Fernandez recognized Monastrell was perfect for the Jumilla growing conditions. They maintain approximately 200 ha of organically farmed vineyards.

Thank you to Jumilla Wine for providing me with these samples. Jumilla has a wine route that is waiting for you to visit. They are easily located just 3 hours from Madrid and an hour away from Alicante. Find out more about the region, the wines and how you can acquire them, visit Jumilla Wine’s website.

Places get bad raps. It is inevitable. People see only a portion, and create a description of a whole. They hear something and without even taking the time to research it themselves, they adopt it as the truth. This is, or should I say, was, the plight of the Lodi wines in California.  Unfortunately, thanks… 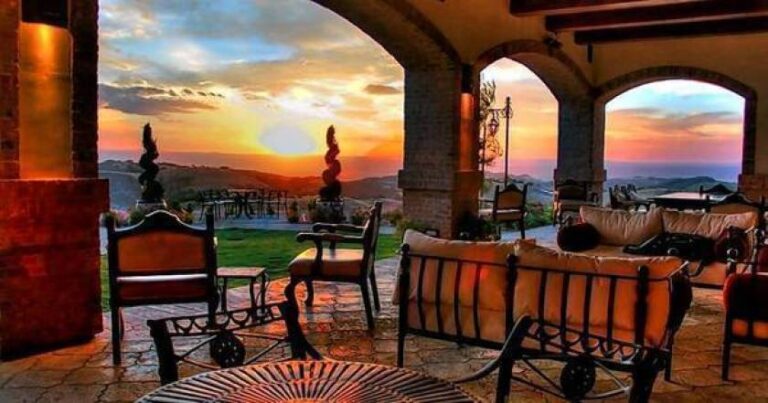