Places get bad raps. It is inevitable. People see only a portion, and create a description of a whole. They hear something and without even taking the time to research it themselves, they adopt it as the truth. This is, or should I say, was, the plight of the Lodi wines in California.

Unfortunately, thanks to a song written by Creedance Clearwater Revival in 1969, Lodi was faced with a large scale disrespect for its wonderful city.

Just about a year ago
I set out on the road
Seekin’ my fame and fortune
Lookin’ for a pot of gold
Thing got bad things got worse
I guess you will know the tune
Oh Lord, stuck in Lodi again

Similar to the “Sideways Effect,” people really do not understand the meaning behind the statement. The song is about a struggling musician. Someone who is spending their life on greyhound buses traveling from one city to the next playing in bar after bar and moving on the next day. It doesn’t matter the city, since the situation is always the same. In fact, in an interview, John Fogerty stated that he never intended to give the small town a bad rap. He simply used the town because as a child, he camped at Lodi Lake. His brother and he hated camping. While writing the song, the name worked well, and the rest of the story is history. Sadly, the unwarranted impression stuck. 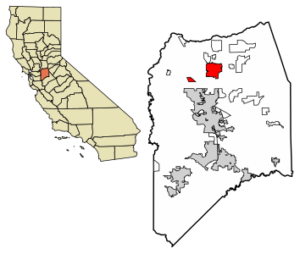 Located in the San Joaquin Valley, in the northern section of the Central Valley, Lodi has a long history. A history that has always been wine focused. In fact, grapes grew wild along the riverbanks and in 1858, George West became the first commercial vintner in the area when he built the El Pinal Winery.

Farming history in Lodi really began with watermelons. But as watermelon growth halted, the resilient farmers turned to grapes. When prohibition began, once again, the irrepressible people focused more specifically on Zinfandel. Thinking outside the box, the grape growers shifted gears from shipping wine to shipping grapes with the explicit directions, “Do no add water and sugar!” The thick skinned berries of  Zinfandel allowed the grapes to transport cross country well and by providing the “non-instructions” the lucky recipients were able to make their own wine.

After Prohibition ended, Lodi wine region flourished for a few decades by producing Tokaj, Zinfandel, and dessert wines. But the American palate began to change and once again the farmers needed to adapt or become extinct. They began focusing on producing quality varietal winegrapes. Beginning in the 1960s and over the next 30 years, Lodi once again re-invented itself. They began to convert their vineyards to premium varietal winegrapes.

A large hurdle of changing the impression of Lodi occurred when the Lodi Appellation AVA was created in 1986. Known as the “Zinfandel capital of the world,” and named “Zinfandel Capital of the World” and named “2015 Wine Region of the Year” by Wine Enthusiast, Lodi is now gained substanial respect not only for its Zinfandel but for other eclectic wine varietals, as well as its focus on sustainability under the Lodi Rules program.

“Be the change that you wish to see in the world.”

“Never doubt that a small group of thoughtful, committed, citizens can change the world. Indeed, it is the only thing that ever has.”

In 1991, the grape growers decided it was time for change and took these quotes to heart.

They banded  together and voted to fund the Lodi Winegrape Commission through a self-imposed wine grape tax. Their mission was to “To serve the common interests of all Lodi Crush District 11 winegrape producers and to enhance the profitability of winegrape production through promotion, research, and education.”

Since then, Lodi has proven they are so much more than Zinfandel. With that being said, let’s not turn away from their Zin. They have vines that date back to  1888 with some still on their own roots. (now that’s Old Vine Zin!) They produce quality white and red grape varieties that are common in France, Spain, Italy, Portugal, Germany and Austria. Grape varieties you can enjoy include Blaufrankisch, Dornfelder, Zweigelt, Regent, Gewürztraminer, Kerner, Rieslaner, Riesling, Weissburngunder(Pinot Blanc), and Grüner Veltliner. (just to name a few)

A Virtual Sip of Lodi

Continuing the thread of more than just Zin, I was part of a virtual tasting with Snooth media. The chat was hosted by award-­winning author, speaker, consultant, and television host, Leslie Sbrocco, and we had the opportunity to taste through six Lodi wines, without a Zinfandel in sight. Additionally, we got to meet Adam Mettler, the Director of Wine Operations/Lead Winemaker for Michael David Winery & Winemaker for his own brand, Mettler Family Vineyards. Oh, and let’s not forget he was named 2016 Winemaker of the Year by Wine Enthusiast Magazine.

Earlier this month, I was priviledged to taste some #LodiWine thanks to a virtual tasting by @snoothmedia and hosted by award-­winning author, speaker, consultant, and television host, @lesliesbrocco. . Have you had the opportunity to taste Lodi #wines? The days of being “stuck in Lodi” are over, and it has become a well respected #wine region. They are so much more than just #Zinfandel. There are new plantings and new wineries and has become a hip fun place to be! . There are 7 sub-AVAs in the Lodi wine region. Lodi produced about 20% of California’s wine production and about 40% of California’s quality Zinfandel. The Delta breezes are what makes Lodi so special. . The first wine we tasted was @acquiescewinery 2018 #Ingenue. A wine that is not yet released. (SRP: $32) A white blend of 35% Clairette Blanche, 35% Grenache Blanc, 20% Bourboulenc, and 10% Picpoul Blanc. 13.0% ABV Acquiese is a verb that means to surrender or to become quiet. This is what will happen when you taste Susan Tipton’s wines. You won’t want to waste any time talking, because your palate is going to be screaming at you to take another sip. Susan focuses on Rhone varieties AND produces only white and rose’ wines! Watch the video at: http://www.snooth.com/virtual-tasting/video/a-virtual-sip-of-lodi/ . #lodirules#winetime#lodiwinecountry#winecountry#wineenthusiast #wine #winelover#winetasting #winepairing#wineenthusiast #winetravel #winelife#wineblog #lifestyleblog#livingthegoodlife #californiawines #lodiwines#sommelier #igwine #wineoftheday#wineoclock #winetravel #winewriter #cawine #californiawine#caliwine @visitlodi @lodichamber @lodi_wine

A post shared by ExploringTheWineGlass (@exploringthewineglass) on Apr 19, 2019 at 7:29am PDT

How many of you have had #Vermentino? Known as an aromatic grape grown in #Sardinia, #Corsica, and southern #France. Genetically identical to #Favorita grown in #Piedmont. . @m2wines is known for the small-lot wines that go beyond expressing their #terroir. Combining old world experiences with new world knowledge, their wines are one you will want to have in your glass. You can visit their tasting room on Peltier Road near Lower Sacramento Road in Acampo, CA every day of the week from 11am – 5pm. . I paired this wine with a recipe inspired by @cookingchatwine; aspagus and goat cheese pasta. A super simple meal to make and a wonderful match for the #wine. A wonderful suggestion for the all so difficult #asparagus pairing. The little bit of #lemon helps tie the whole thing together. Find the original recipe at http://cookingchatfood.com/asparagus-goat-cheese-pasta/ I modified the recipe a bit by roasting the asparagus and adding #seasalt. . And after trying the #Vermentino, check out their White Dog White; which they donate some of the proceeds to Local Animal Charities. 91.52% VERMENTINO, 9.48% #RIESLING, #RIESLANER & #GEWURZTRAMINER Can you ask for anything more? #lodica #m2wines#winetasting#lodiwine #visitlodi #winepairing#sample#foodporn#foodpairing #foodporn#wineporn @snoothmedia @lodi_wine @visitlodi @lodiwinetour @lodiwinetours

A post shared by ExploringTheWineGlass (@exploringthewineglass) on Apr 7, 2019 at 5:03am PDT

“The secret to a good morning is to watch the sunrise with an open heart.” ― Anthony T. Hincks Is it wrong to watch it with an open bottle of @langetwins Rose’? (full disclosure, I was not drinking at 6:20am) When I awoke, I saw the magnificent colors in the sky and it reminded me of this #Aglianico Rose’. Don’t they match beautifully? . Have you ever had Aglianico? The grape has a long history. Originally cultivated by the Phoenicians, it was then exported by the Greeks. Of course the Romans drank it and the popes protected it. Most known in two expressions; Aglianico del Vulture in Basilicata and Taurasi in neighboring Campania. In these versions, you can expect savory flavors of leather, white pepper, black fruits and cured meat. . Lange Twins 2018 Rose’ of Aglianico is a winery exclusive (SRP: $20) The natural high acids of the grape lend itself to be ideal for a rose’. The fruit is harvested from their River Ranch Vineyard. The vineyard was planted in 2015. Their food pairing recommendations are: Cheese: Goat / Meat: Chicken, Lobster / Sauce: Light Cream Based / Dessert: Shortbread. Certified Lodi Rules for Sustainable Winegrowing and 13% ABV . #sample #lodirules#lodiwine#drinklodi#wine:30 #lovelaughterfamilywine#lodiwine #visitlodi #lodirules#winelover #winetime#chilledwines#roséallday #rosé #roséwine #roséseason#yeswayrosé #brosé #brose #yeswayrose #roseallday #wine #drinkpink @snoothmedia @lodi_wine @visitlodi @lodichamber ​

A post shared by ExploringTheWineGlass (@exploringthewineglass) on Apr 20, 2019 at 6:02am PDT

What is your opinion of #Pinotage? It is the red wine grape that is South Africa’s signature variety and was created in 1925 as a cross between #Pinotnoir and #Cinsaut. Generally speaking, Pinotage does not have the best reputation. . It typically is a high production vine and is thought of as a low quality wine. However, in the recent years, between improvement in wine making techniques and a refocus and better crop management, it is beginning to make a turn around. . I’d like to introduce you to @mettlerfamilyvineyards and guarantee that this is not a low quality #wine. Adam Mettler was named the 2018 winemaker of the year and his Pinotage, selected from small blocks, is like no other I have ever tasted before. Dark and rich, almost a Pinot on steroids. (in a good way!) The 2016 Pinotage: Rainier cherries, plums, blackberry pie and anise make your palate happy! At only $25 this is a bottle you are going to want to explore. . Learn more about this wine and other @lodi_wine on @snoothmedia Watch the video at: http://www.snooth.com/virtual-tasting/video/a-virtual-sip-of-lodi/ . #sample#visitlodi#lodica#lodicalifornia#mettlerfamilyvineyards#virtualtasting#lodiwine#snoothbloggers#winemakeroftheyear #mettlerwine#lodiwine #lodifarmers #spring#winestagram#winesofinstagram #winelover @lodiwinetour @visitlodi ​

A post shared by ExploringTheWineGlass (@exploringthewineglass) on Apr 23, 2019 at 6:01am PDT

Not even rain can dampen my opinion of this lovely #Carignane. Another “not yet released” wine that I had the privilege of tasting at the #VIRTUALSIPOFLODI hosted by @snoothmedia and @lodi_wine. . Carignan is thought to be of Spanish origin from the #Cariñena in Aragon. Carignan ripens late so is a grape that is suited to warm climates, however, it is susceptible to both powdery and downy mildews and requires extensive spraying in most areas, except the driest climates. . The fruit is harvested from Greg Burn’s vineyard which has some of the oldest Carignane vines in Lodi. “At PRIE, we let our geek shine. To live, to learn, explore, challenge perceptions, to be. This passion is in all things wine and vineyard.” . Poured ruby in the glass. Aromas of red berries, and white pepper. Lovely well integrated medium tannins coat your palate with flavors of red berries and spice. Medium (+) acidity allows the wine to linger for a long finish. . #sample #vignes #vineyard #vinyes #viñas #carignan #winerylovers #winetasting #winedestinations #Lodi #California #Snooth #wine #wines #virtualtasting #visitLodi @visitlodi @lodiwinetours @lodichamber @lodiwinesocial

A post shared by ExploringTheWineGlass (@exploringthewineglass) on May 9, 2019 at 6:02am PDT

https://www.instagram.com/p/BxKYetLHzSU/?utm_source=ig_web_copy_link
Be sure to visit all of the wineries websites to find out more about their wineries and wines. I promise you won’t be disappointed! If you would like to watch the replay of the virtual tasting click here.