It’s that time of year, and this year it came early.  Mother nature created a situation where the fruit ripened earlier than normal. In fact, in many areas it has been the earliest harvest in history.  What does that mean? You’re guess is as good as mine.  Some people say it will be a stellar year, others are concerned that it will be a poor year.  All I can say at this point is that the fruit was light.  There vines did not produce as much fruit as in the past. But for every cloud there is a silver lining- the fruit that was there is awesome!
Our second vintage had its moments. In case you do not know, we are bi-coastal.  We live and work in New Jersey, but we source fruit from Paso Robles.  You can read our story here. This year’s harvest began with the “early scare.”  With Napa/Sonoma having such an early harvest season and our fruit ripening so quickly, we purchased airline tickets for the first week of October.  Then the temperatures dropped and the ripening slowed down.  Anyone who flies knows, it is not an easy task to change your airline tickets.  $200 later, we had new flights three weeks later.  It was another gamble, but one that paid off.  The fruit was ready when we were there.
You couldn’t have asked for more perfect weather.  Look at those 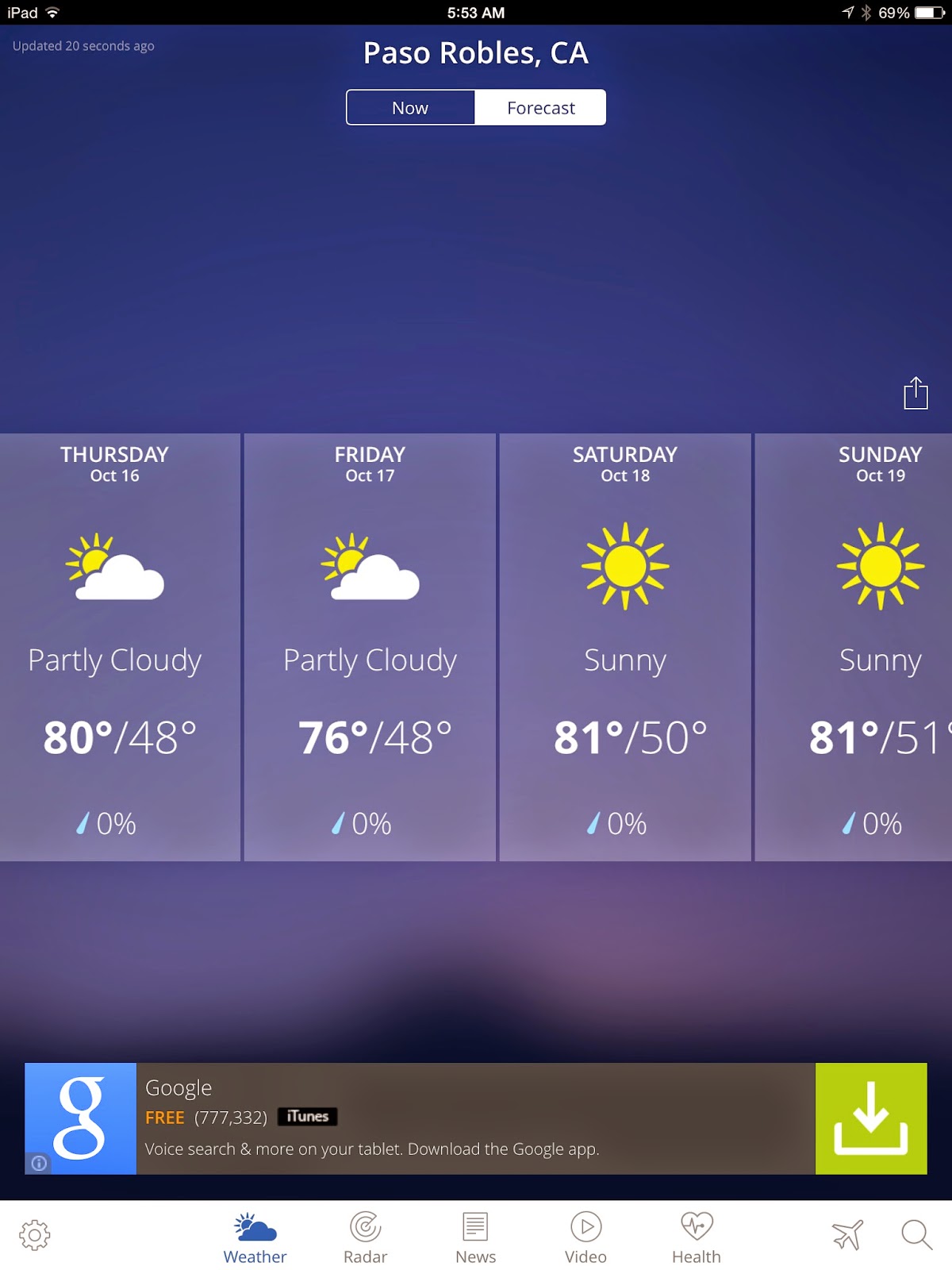 numbers.  Zero percent chance of precipitation and nice daytime temperatures and cool evenings.  If you have been to Paso in the past, you know the temperatures can be over 100!.
Mike flew out on Wednesday, after several hours of a delay- he finally made it into John Wayne Airport.  Then just a short 3 1/2 hour drive to the hotel in San Luis Obispo.
Harvest was scheduled for Friday, October 17th in the am.  On Thursday, Mike had some work to do for the 2013 vintage. We had to move our barrels from where they were being stored in Paso Robles, to our new winery location in San Luis Obispo (SLO).  It is nerve racking experience.  Although the odds are small that anything will happen, you aren’t happy until they are safe at their new destination.
All I kept thinking about was what if the driver had an accident, what happened, if he swerves too hard?  Thank goodness for professionals, because there is no way we could have done it without him.
After our barrels were moved, it was time to go to the vineyard and see our fruit and do a final check.  These are pictures from our block of fruit. 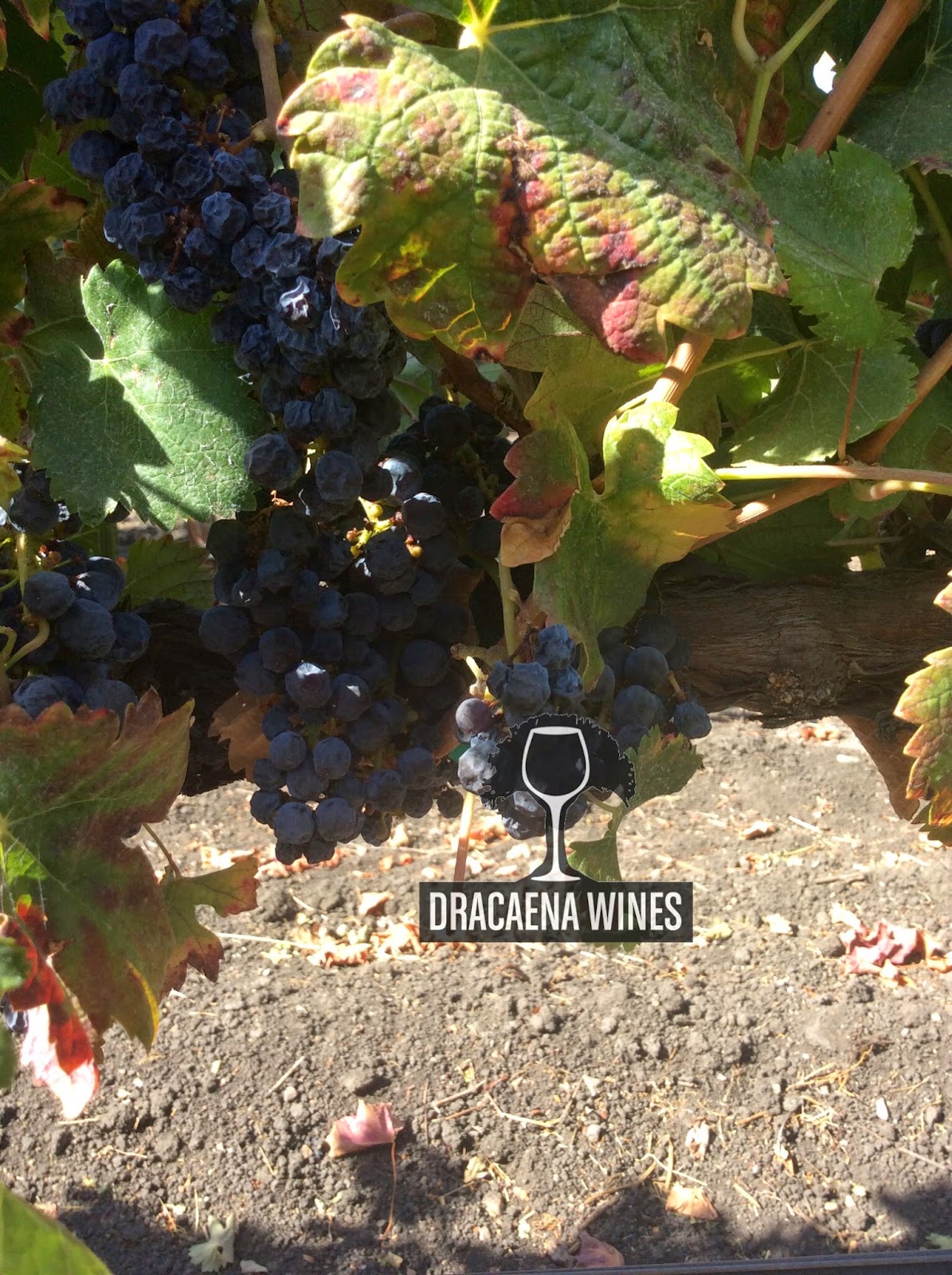 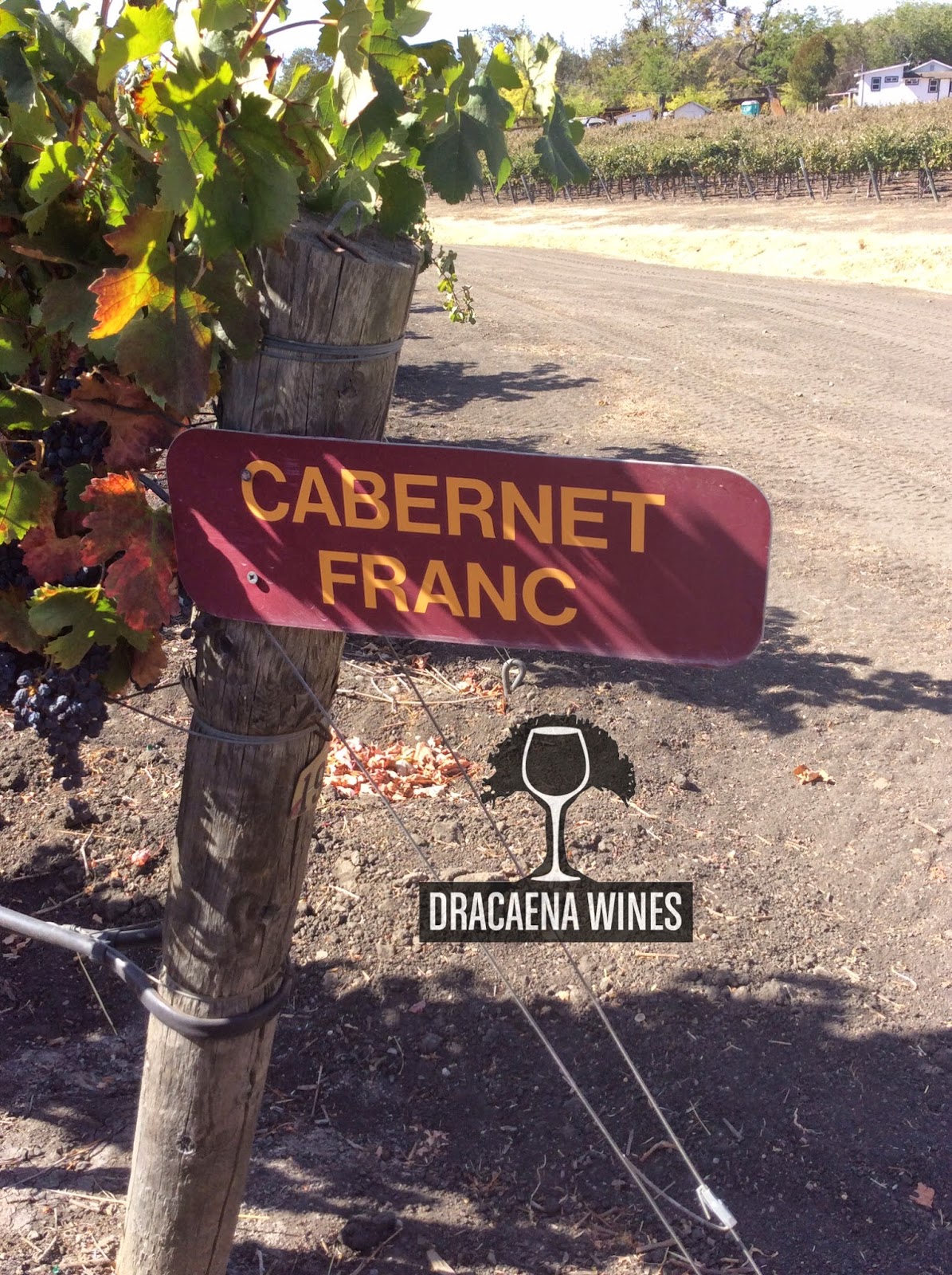 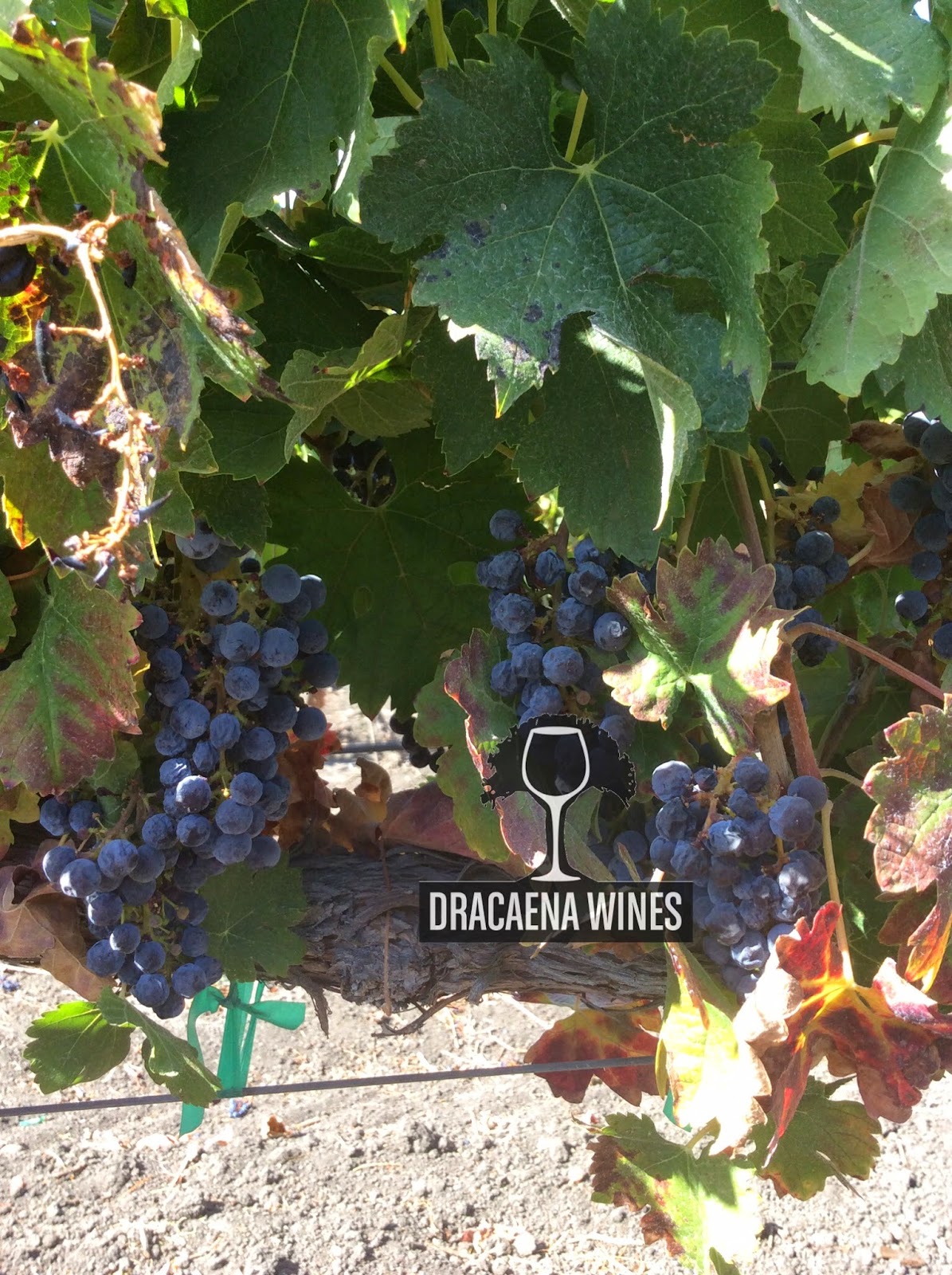 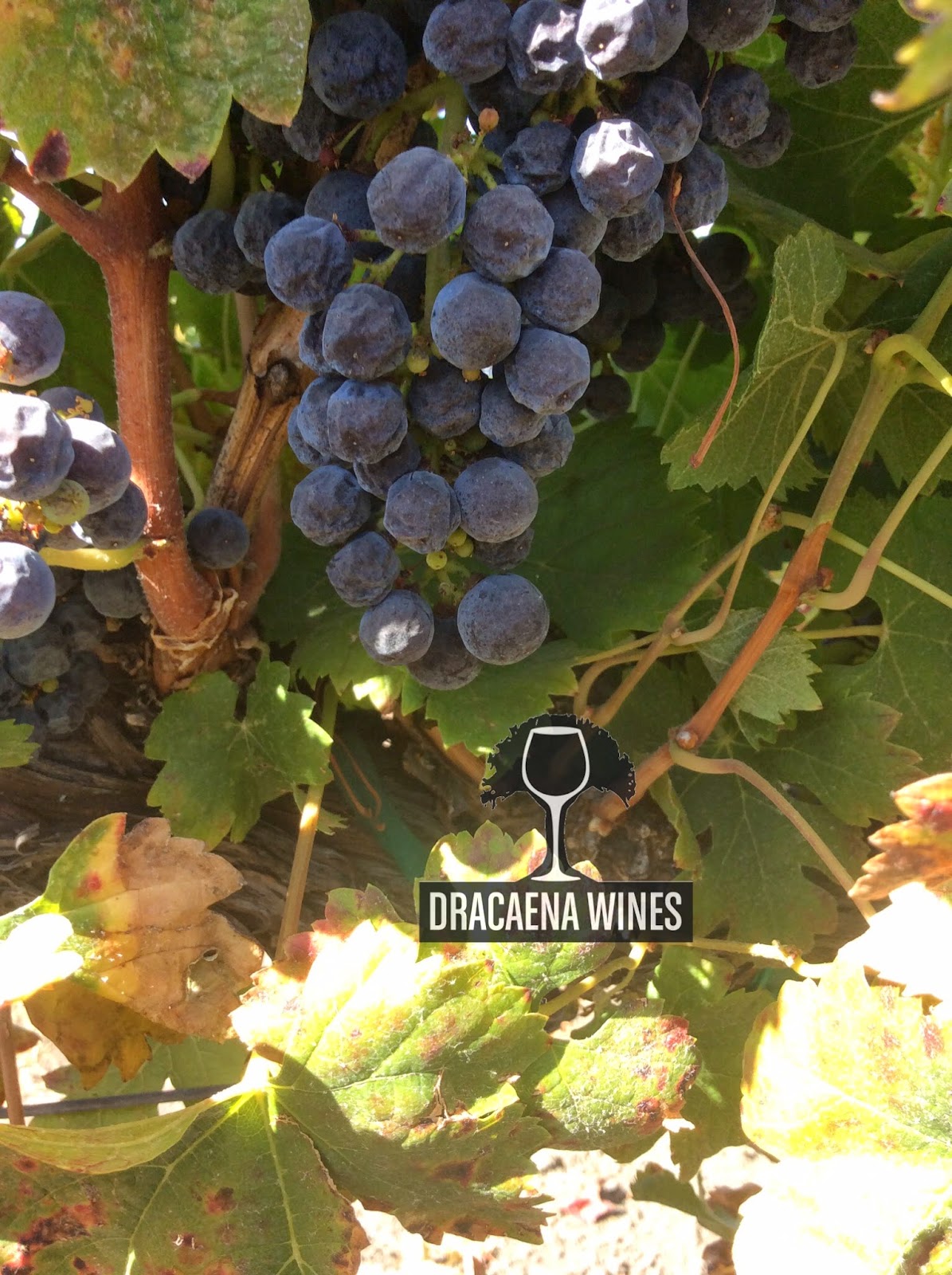 After leaving the vineyard, we returned back to the winery in SLO and had a meeting with our consulting winemaker, Jeremy Leffert to discuss the game plan for harvesting the next day. Things to consider at this point included;
1-making sure the bins were brought to the vineyard.
2- making sure the delivery truck would be at the vineyard on time to bring the grapes to the winery. You do not want the grapes sitting in the bins for longer than necessary.
3- arranging for the picking crew
4- arranging for the winery itself to have the equipment ready to go to receive the fruit
5- destemming/cold soak/fermentation philosophy
As you can see, there are a lot of logistics involved in making sure harvest goes well. And these don’t even include the grapes themselves being good!
The actual harvest will be in another post- so stay tuned and thank you for reading.
~Sláinte!

We have been enjoying our trip so far. However, we really haven’t purchased that much wine. We brought out 4 empty shippers plus we purchased a new product to ship another case home ( more on that in a later blog post) and most of that is sadly empty at the moment. The Santa Barbara…

According to KSBY Channel 6 News, the Central Coast is now in their 4th year of drought and most estimates are that there is about 1 year left in above ground water supply and that ground water is being used far too quickly. So rain is good. Rain is needed. Rain is welcomed.  BUT MAYBE NOT…

In case you haven’t heard, December 4th is #CabFrancDay! We will be celebrating all day on Twitter, Google +, Periscope, and Instagram with Cabernet Franc facts. Then at 8pm EST, we will have a twitter chat. All you need to do to participate is grab a bottle of Cabernet Franc, sit at your computer or phone or…

The Art of Starting a Winery Dracaena Wines has been producing award-winning wines since the inaugural 2013 vintage.  We have poured our hearts and souls into each and every bottle.  We are a small producer; one that relies on our customer’s spreading the word about our wines. As with any business, you need to have… 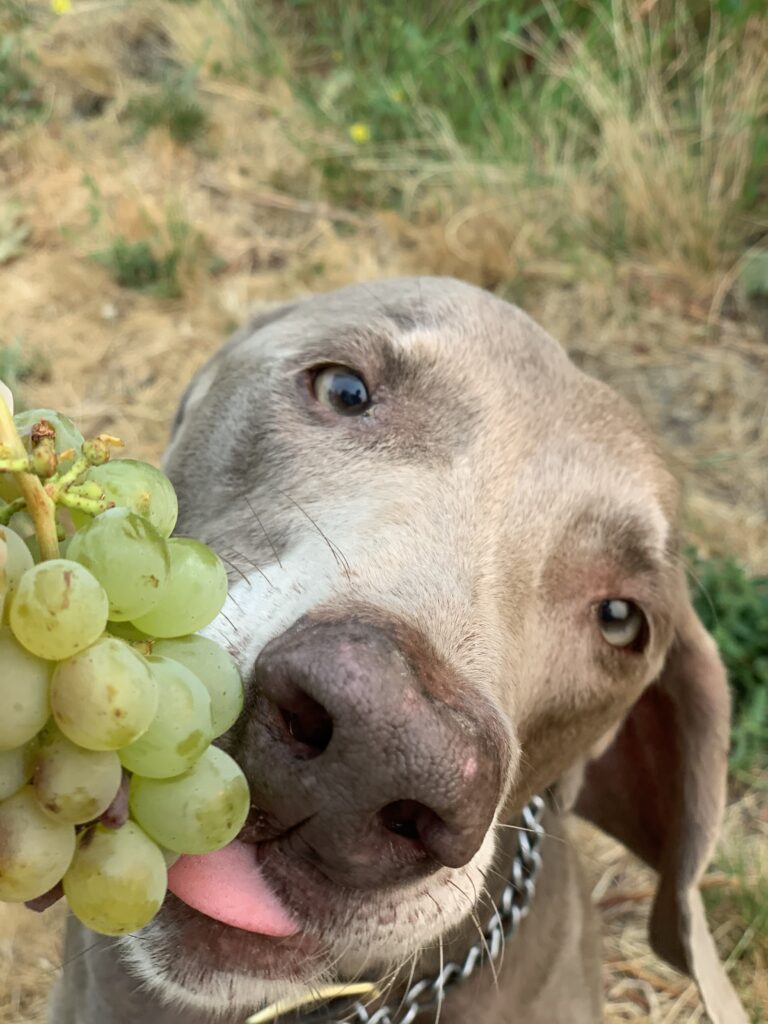 It was an exciting week. We brought in our first fruit of the harvest. Our Chenin Blanc! In all honesty, it was doubly exciting, since it was also our first time bringing in a white. I hear all the time that people would love to work a harvest, so I thought it would be an…