26 centuries ago, when the Greeks founded a colony in Marseille, the winegrowing culture was introduced in Provence. These wines were light in color very similar to rosé.  It is thought that they weren’t really trying for rosé per se, it was that the technology of maceration on the grape skins was either not known or in very limited use. It is for this reason that Provence is considered the oldest winegrowing region in France, and the first wines to be made were Rosés.

True rosé is made from red grapes. The color comes from the anthocyanins (natural pigments) found in the skin. The quality of the wine depends on several things including the type and quality of the grapes, the temperature within the vat and finally the length of time the grape juice remains in contact with the skins.  The longer the juice remains in contact, the darker the wine will be.

There are two main processes when it comes to producing a rosé. In the saignée method, the wine is siphoned from the grape juice during the red wine making process.  The word literally means “to bleed” in French. By bleeding the rosé, two purposes are served. It creates a pinkish-hued juice for the rosé and it allow the red wine to be further concentrated, darkening its color.

The Direct Press method, which is generally thought of as the higher quality way to produce a rosé, the red wine grapes are picked specifically to produce a rosé but are treated similar to a white wine production. Quickly after being harvested, the fruit is pressed to separate the juice from the skins. The resulting juice drains from the press, and fermentation can begin. Since there is minimum contact between the grape “must” (or juice) and skins with the direct press method is minimal, the resulting rosés tend to have a paler pinkish hue than their saignée counterparts. This is the process used throughout France’s Provence region.

There is much debate over which process is better. Some believe that the saignée method is merely a byproduct of the desire to deeply concentrate specific red wines. While the direct press method the fruit is destined to be a rosé from the beginning, so the quality is thought to be higher. Still, the saignée method is in wide practice, and there are a number of high quality rosés produced by this method.

The good thing about rosé is that there are an insurmountable number of possible pairings. However, that can also be a bad thing when you are trying to come up with a recipe to pair with it.  Let’s take Cabernet Sauvignon for example. If I said to you, we were having a Cab Sauv, your mind is probably going to pigeonhole into a specific meal that includes some sort of beef. (Before anyone starts leaving rude comments below, I know it can pair with other foods, however, let’s be honest, your prefrontal cortex is screaming beef.)

After vacillating the countless options for quite some time, we settled in on adapting a recipe for Thai chicken grilled pizza we found on BigOven.com. I used my recipe for grilled pizza dough and Mike took a look at the general recipe and let his culinary creativity take over.

PROCEDURE:
1. In a small bowl, combine the warm water, sugar, 1/2 cup of the flour.
2- Stir to combine.
3- Add the yeast and stir. Let sit for about 10 minutes.
4- Meanwhile, in a large bowl, add the remaining (2 cups) of flour and the salt.
5- After the ten minutes, add the yeast slurry to the flour. Add 1 Tbs olive oil and mix until the dough is not sticky.
6- Coat the dough in olive oil, so it won’t stick to the bowl, cover and let raise for about 45 minutes.
7- Punch down and let rise again for at least another 45 minutes.
8- Sprinkle corn meal on your counter and take the dough out. Punch the dough down again and split in half.  Making sure you always have enough corn meal so the dough doesn’t stick to the counter, form your pizzas.
9- Let sit for at least 15 minutes.

PROCEDURE:
1. Combine all ingredients except the carrots and 1 Tbs of cilantro over medium heat. Warm through.

Grilling the Pizza
1- Get grill very hot prior to adding the dough.
2- Drop the temperature of the grill to low and add pizza crust.
3- Keep grill cover closed, allowing dough to cook through. Keep an eye on it. The dough can burn quickly.
4- Flip to brown the other side for about two minutes.
5- Remove the dough, add the toppings.
6- Sprinkle with carrots, mozzarella, and top with the cilantro.
6- While adding the toppings, return the grill setting to high.
7- Drop the temperature on the grill to low, place pizzas on the grill and cook just to melt the cheese. 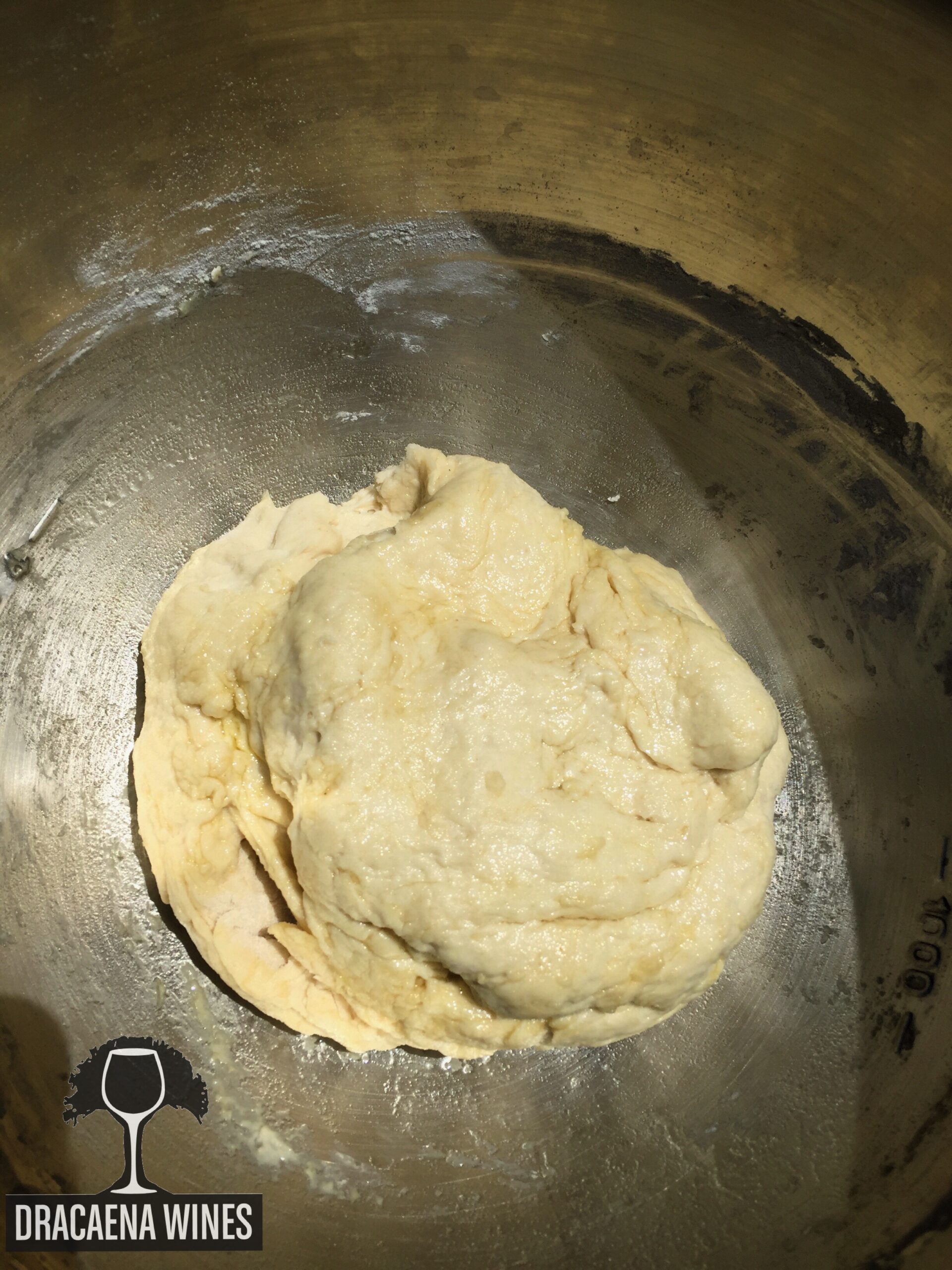 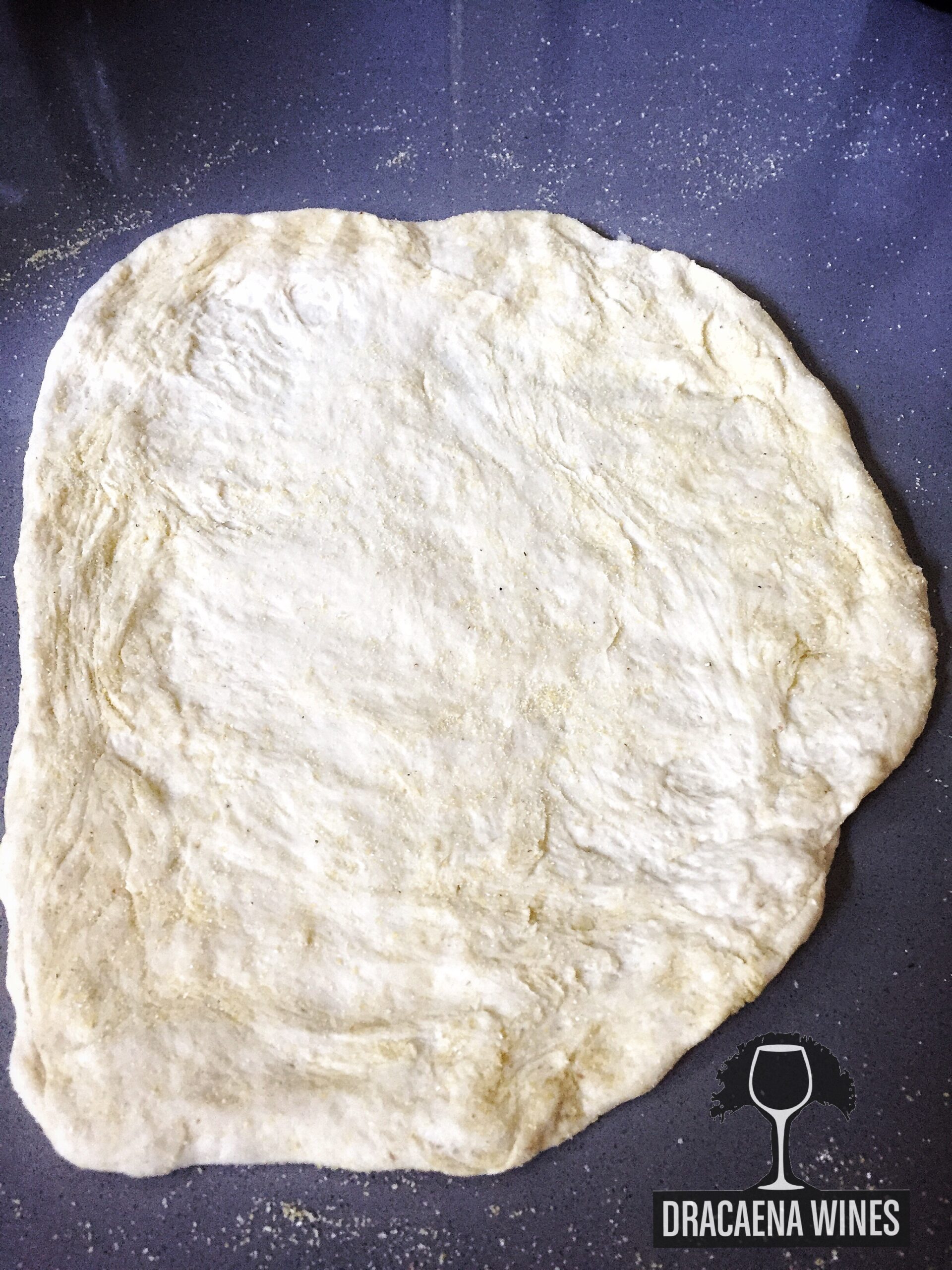 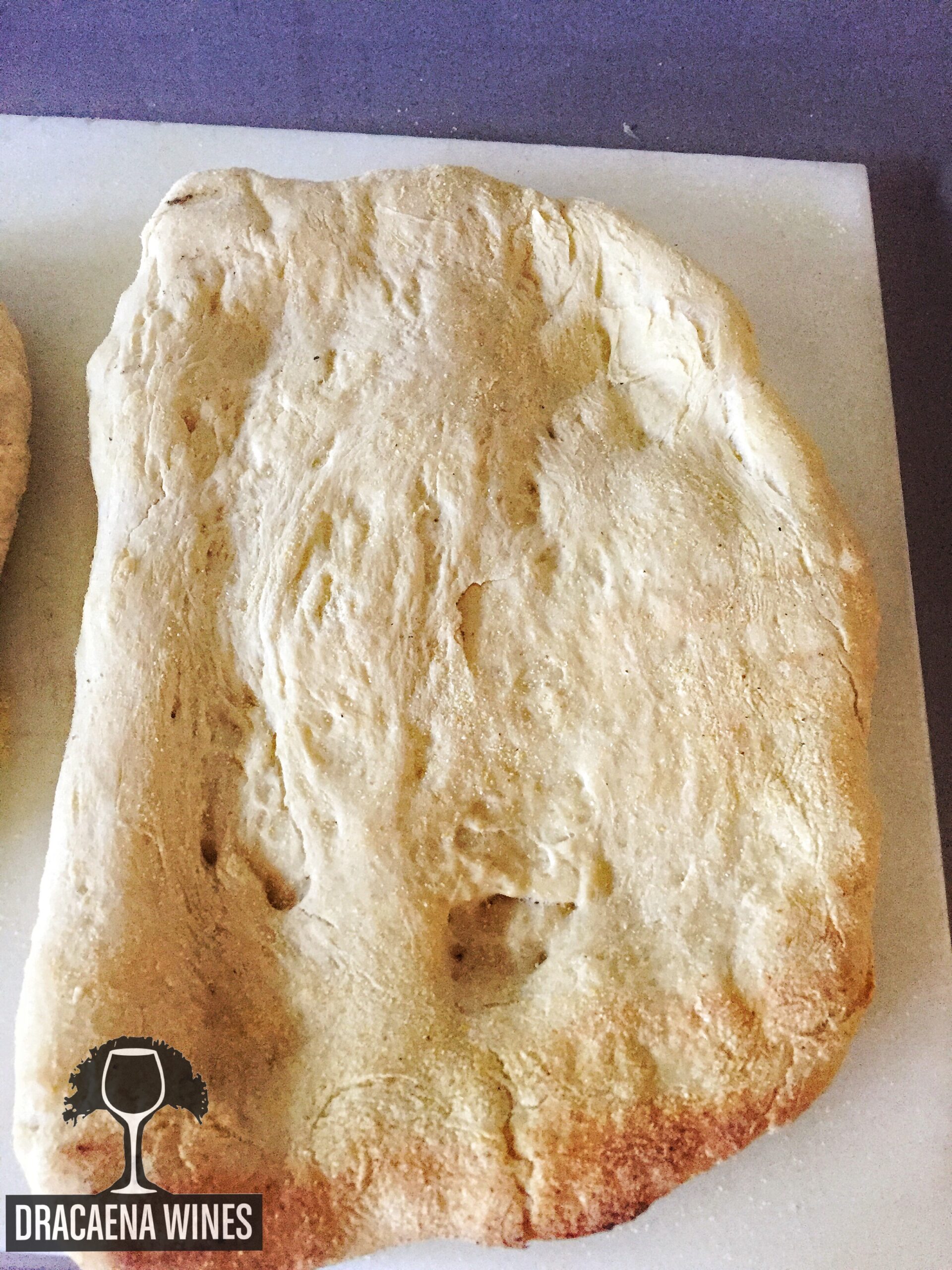 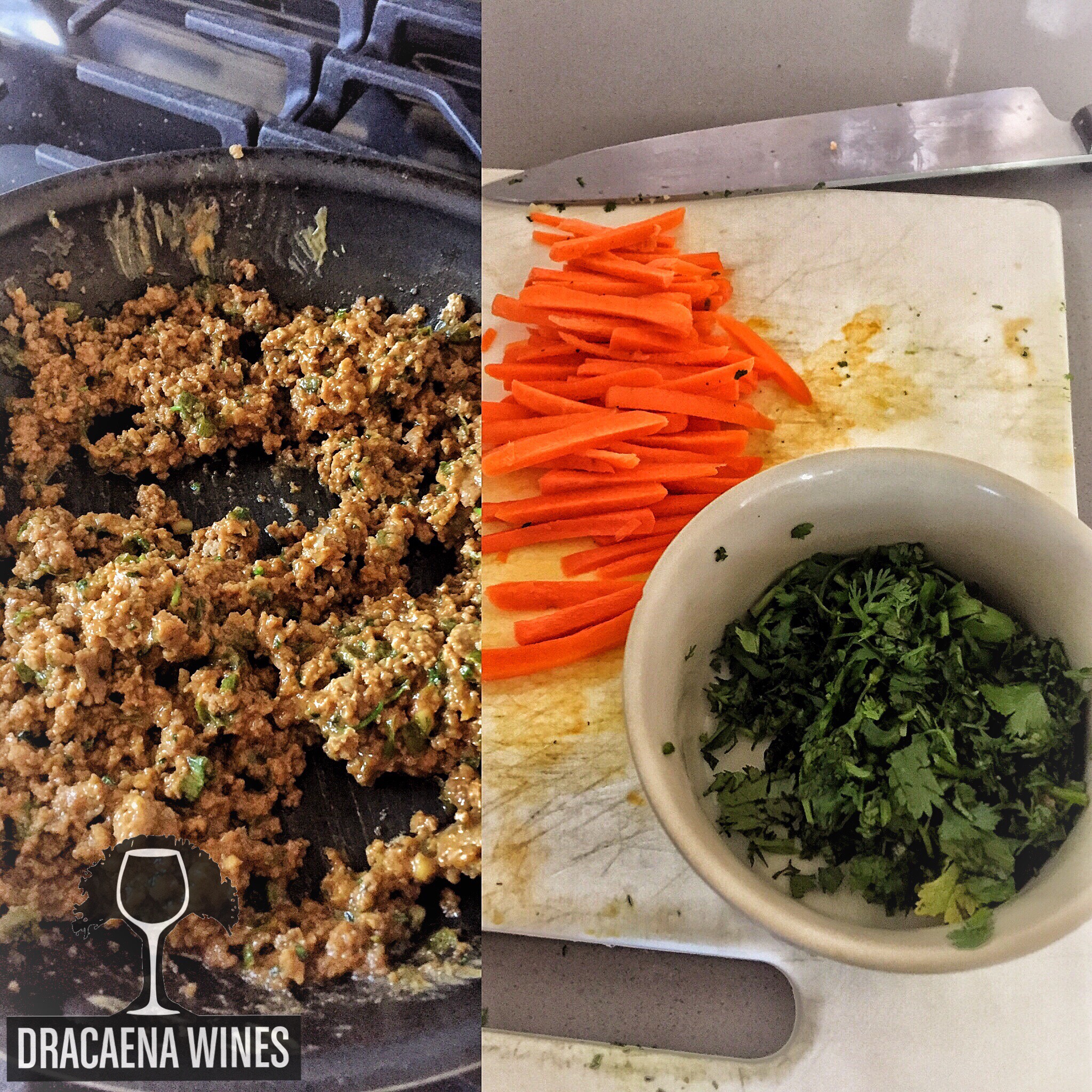 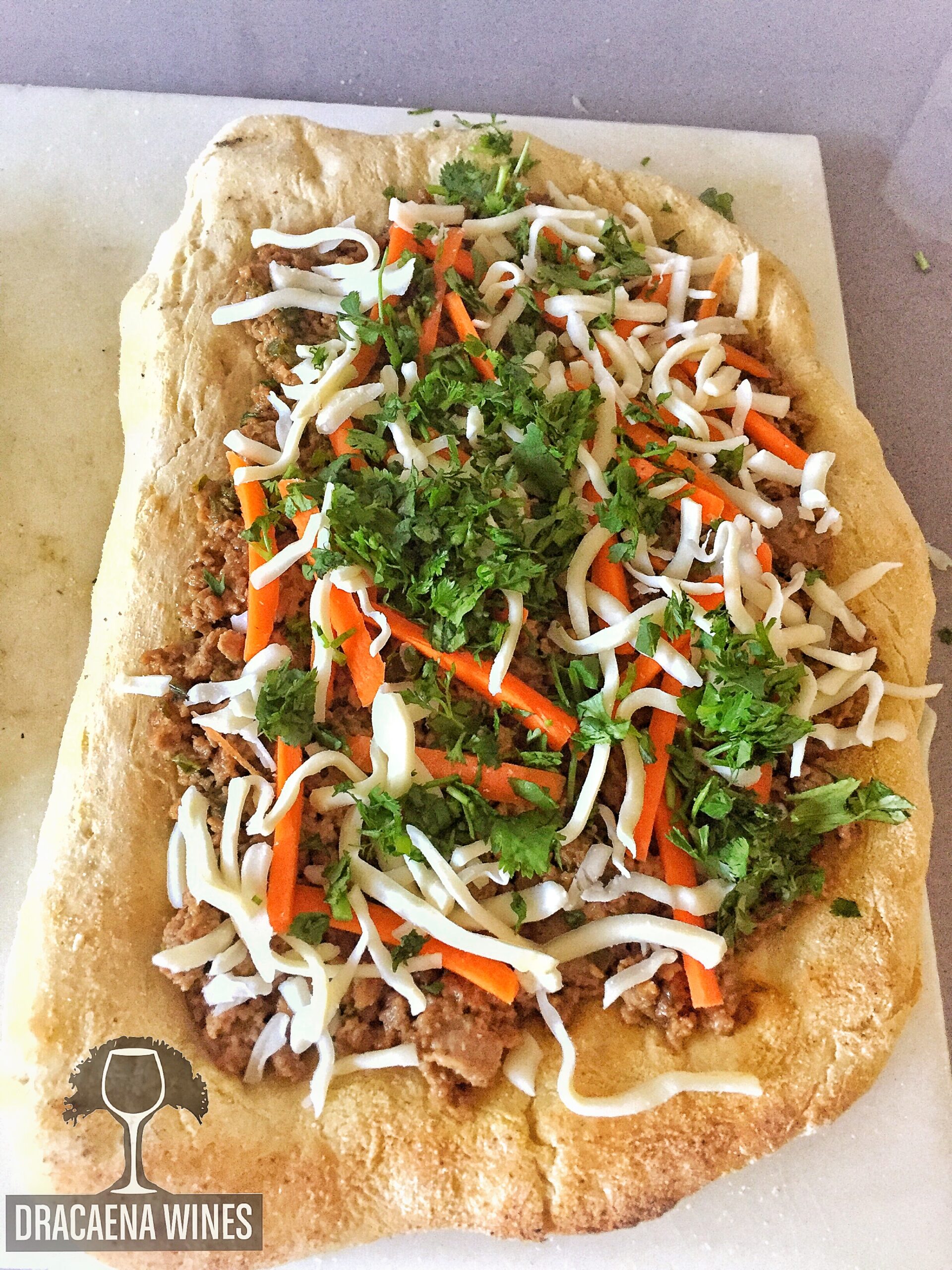 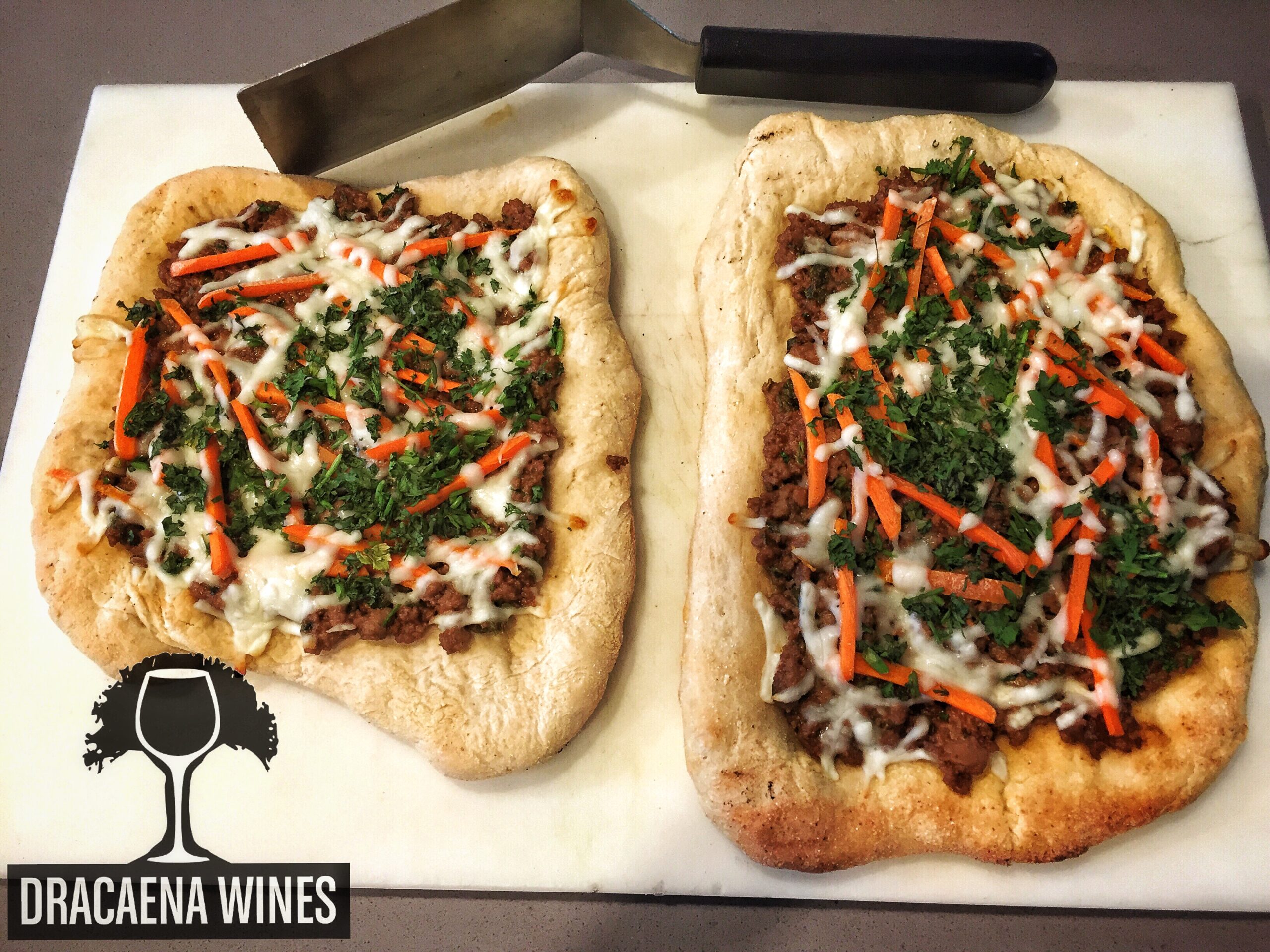 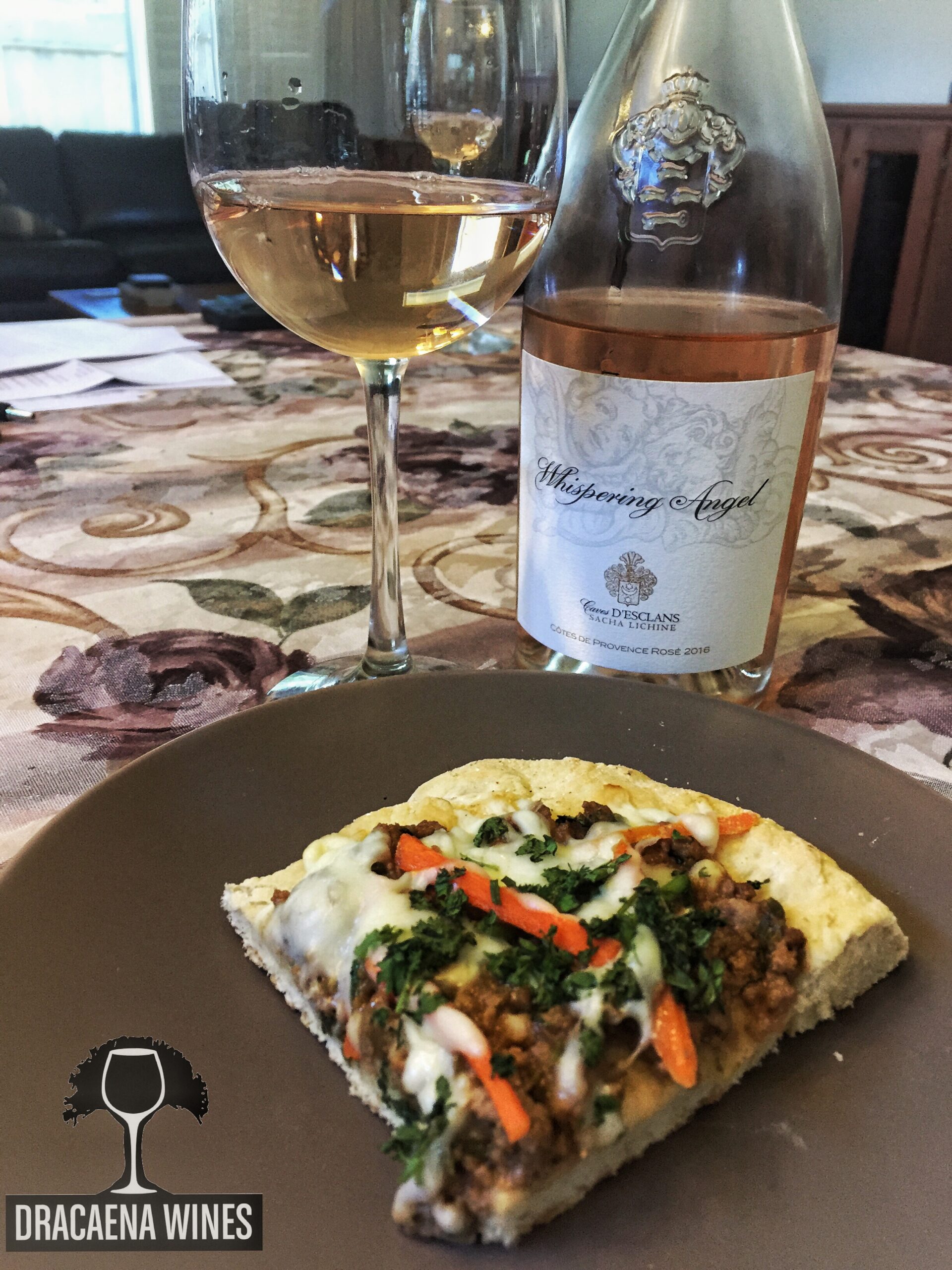 We paired our pizza with Whispering Angel Rosé. This wine has been mentioned all across social media and was receiving rave reviews. When I saw it in our local Costco, I had to grab it and give it a try for ourselves.

The Fresno weather has been brutal. It’s been over 100o for at least the past two weeks. In fact, I think the average has been around 104o!  It was perfect weather for rosé and grilling! 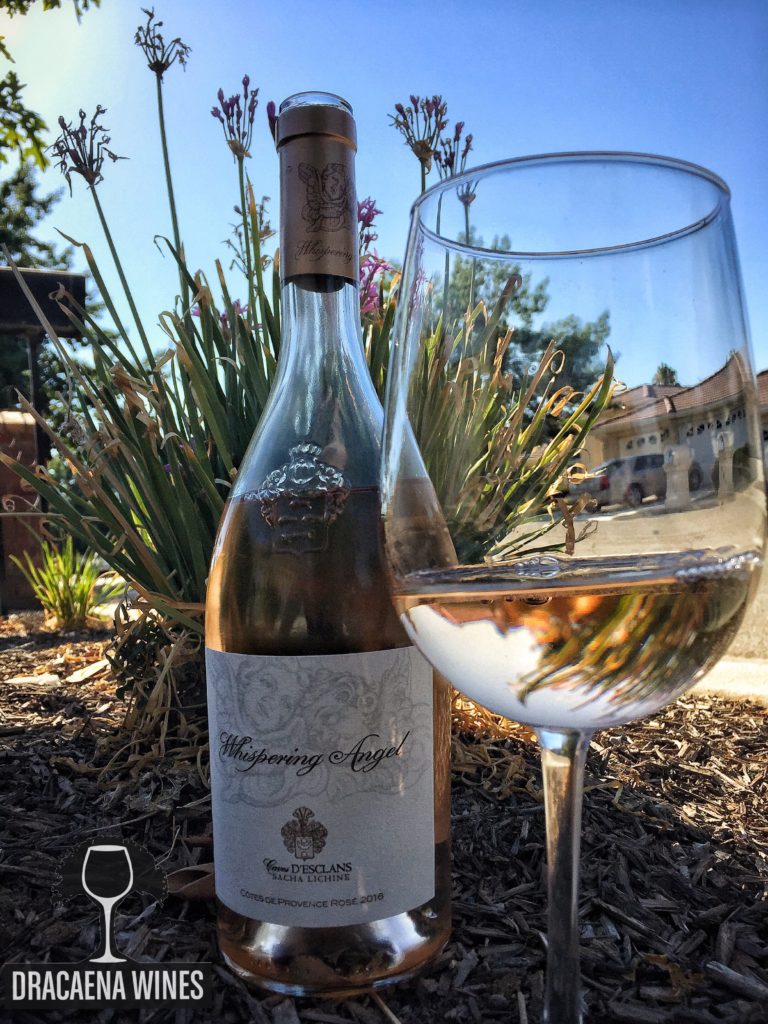 The grapes for this wine were grown in the surrounding region of LaMotte en Provence.  It consists of Grenache, Vermentino and Cinsault. Optical grape sorting was used along with cold temperature destemming and crush to avoid oxidation.

Chateau d’Esclans is located near the Gorges de Pennafort, which is about twenty five kilometers northwest of the ancient Roman city of Frejus on the Mediterranean coast. It is in the center of the Department of the Var, where the majority of Provence AOC rosé is produced. The chateau’s history dates back to the Gaullist era where it was used as a look out point to spot potential enemies coming by boat into the Gulf of Frejus.

Wow! Yep, you read that right, Wow! This was an exceptional pairing. The flavors in the topping, especially the ginger and believe it or not the peanut butter worked so well with the fresh flavors of the wine. It allowed the cherry to really come to the forefront of my palate. Additionally, the combination of the crisp carrots on the pizza and the high acidity in the wine cleansed your palate with each bite/sip, preparing for a whole new pleasure on the next go around.

Although the pairing was fantastic, in all honesty, though, I have had better rosé, for the same money. But that is not to say that I would turn this down if it happened to show up in my glass. The wine is rather high in acidity and is bone dry. Both are requirements for me to drink a rosé. Wine Spectator gave this wine a 90 and called it “alluring with a creamy feel of white peach, mango, and white cherry.” I can see the white peach. I got a hint of peach when we first took it out of the refrigerator, but the wine warmed up quickly, and the peach went away. So maybe, if we had kept it chilled, it would have also made its way into the flavors, however, mango was no where on my radar. 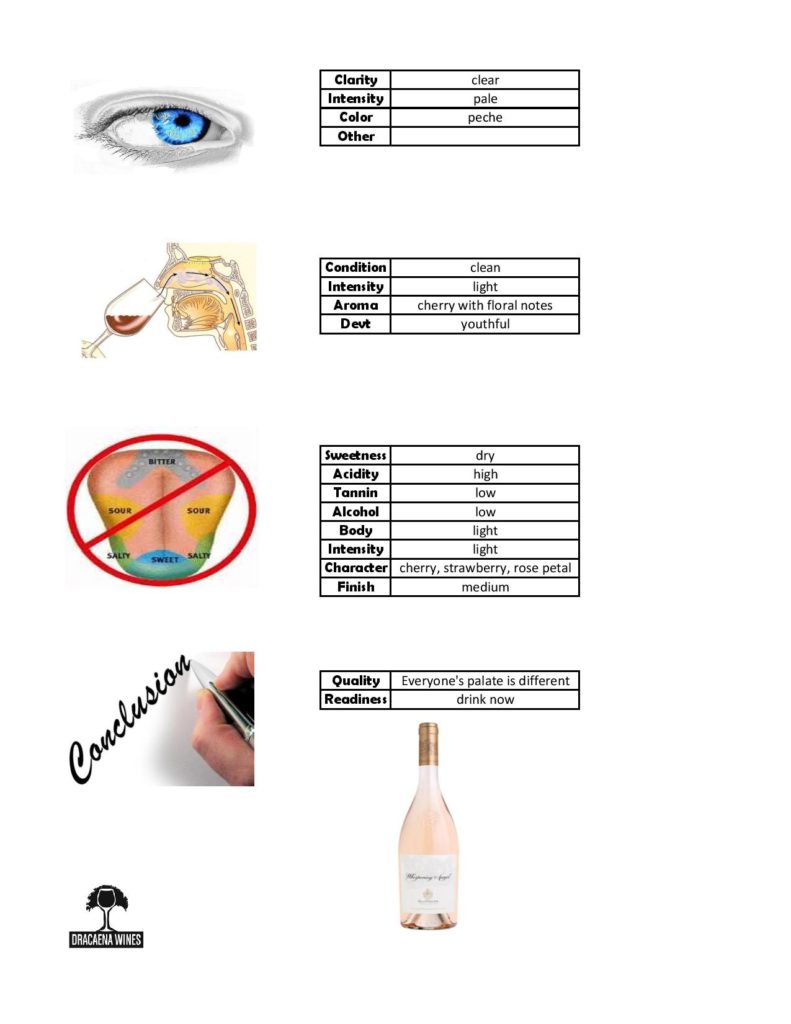 Read About The Other Rosé Pairings

I had the honor of hosting this month’s #WinePW.  A group of wine and food bloggers get together each month in order to bring their two loves together and get social about them. This month’s theme was Enchiladas. [See my invitation post here and my preview post here.] I could not just choose the typical… 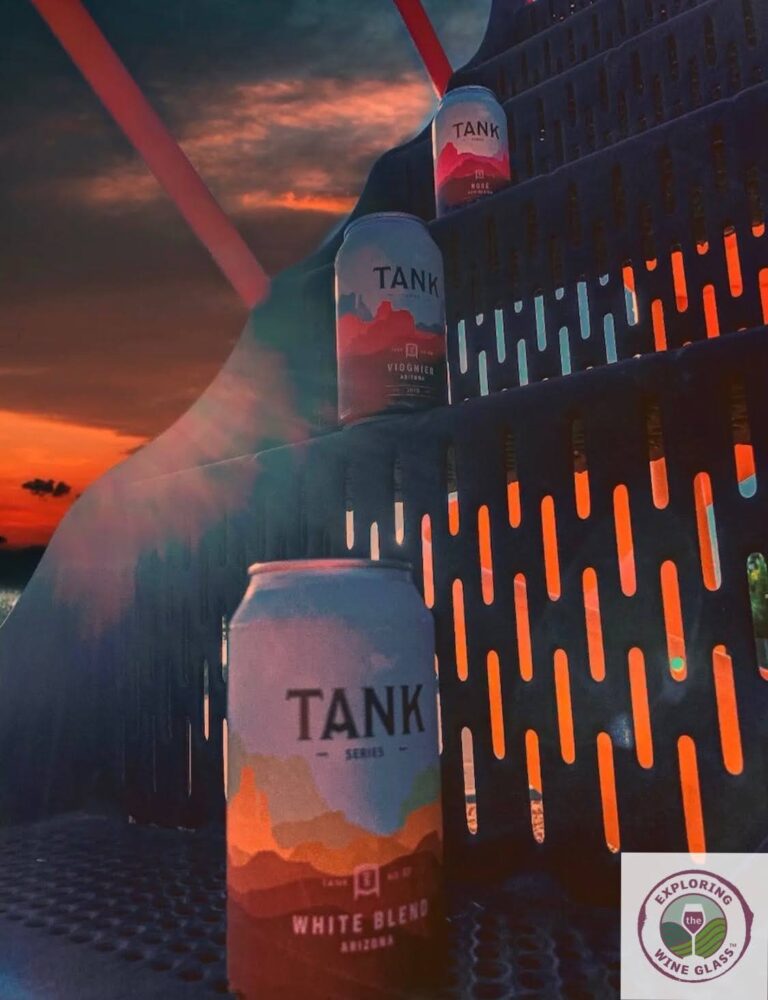 It wasn’t too long ago that everyone was talking about the fact that if a wine was in a screw cap, it must be inferior. Although the traditional cork, making that wonderful sound, is the traditional way to protect the luscious juice inside the bottle, the screw cap has a lot to offer.  Science has… 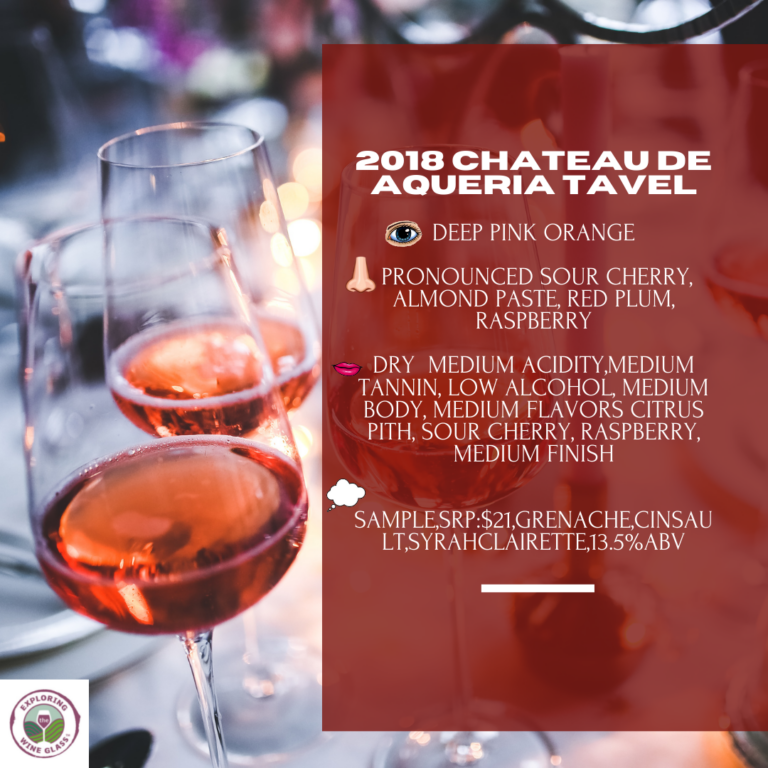 Welcome to our latest installment of #WinephabetStreet brought to you by Dracaena Wines and Trio North Wildwood. In this series, Debbie Gioquindo and I work our way through the wine world one letter each month. We discuss the characteristics and history of the grape, as well as suggested wine pairings. So uncork, unscrew or saber…