The following post is my entry for #MWWC31. Last month’s contest was won by Allison of OkieWineGirl. Her choice is Faith. I was very happy to see that Allison won. I love reading her posts and I had the privilege of meeting her in person last year. You can’t find a nicer person!

Wine has been around for a very long time and it has been paired with religion since the beginning. The Greeks worshiped Dionysus, the god of the grape harvest, winemaking and wine, of ritual madness, fertility, theater and religious ecstasy.

Early images of Dionysus show him as an older male with a beard and robed, holding a pine-cone tipped staff known as a thyrus. However, as time passed, something happened to him and he became quite the stud.  Wine does the body good because later images portray him as young and naked with one heck of a body.

Dionysus was the illegitimate child of a mortal woman, Semele, who was the daughter of King Cadmus of Thebes and Zeus. When Semele was pregnant, word got out to Zeus’ wife, Hera who was not all too pleased.  She disguised herself as a nurse and befriended Semele who confided in her that she was pregnant with Zeus’ child.  In order to get back at Zeus, Hera planted seeds of doubt of the paternity in Semele.  Confused by her so-called friend, Semele contacted Zeus and demanded that Zeus reveal himself in his true god form. Although Zeus tried to convince her otherwise, she demanded and he ultimately agreed to her request.  He presented himself wrapped in bolts of lightning, which unfortunately for Semele immediately caused her death. In order to save his unborn son, Zeus sewed Dionyus into his thigh and gave birth to him a few months later. Dionysus was born a fully grown man on Mount Pramnos in the island of Ikaria.

The Romans had their counterpart to Dionysus in Bacchus. In addition to being the god of

wine and grapes, he is also associated with fertility, and sexual freedom. [amazing how they seem to go hand in hand] Bacchus is often linked to the pagan holiday Beltane. Beltane is a time for fertility.  It is celebrated on May 1 (October 31 in Southern Hemisphere), and is a time of fire festivals, a day of flowers, fertility, dancing, bonfires and general fun. It’s the time when the earth mother opens up to the fertility god, and their union brings about healthy livestock, strong crops, and new life all around, so makes complete sense that Beltane, and therefore Bacchus is the god of harvest.

Unlike, Dionysus who was very fit, Bacchus is described as a youth of a plump figure, and naked, with a ruddy face. He is crowned with ivy and vine leaves, and his thyrsus has an iron head, encircled with ivy and vine leaves. The story of his birth varies slightly to fit Roman beliefs. His father is Jupiter, instead of Zeus. But his mother was still Semele. According to Roman lore, he was raised by nymphs after Semele burned to ashes, after seeing Jupiter in his true form. He was the original agriculturist as once he grew up, Bacchus wandered the earth learning about the culture of the vine and the mysteries of winemaking. 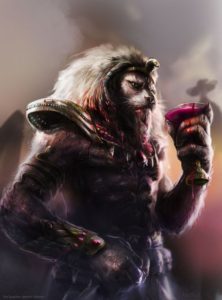 The Egyptians associated a god with wine as early as 4,000 BCE. Shezmu could be known as the god with multiple personalities. He had two distinct personalities. On one side, he had his fair share of parties and celebrations as the god of perfume, precious oil, ointments and wine. But his alter ego was the god of execution, slaughter and blood. While fulfilling his positive side, he protected the virtuous dead in the Underworld and offered them red wine. But his negative side was very strict and punished the unrighteous by placing their heads in a wine press to remove the sinners blood. [ouch] Images of him show him as a lion-headed man or a hawk depending on the virtues of the person seeing him. Shezmu presented himself as a falcon-headed god when met with mortals of noble hearts. But in the face of wickedness he revealed his other side, a lion-headed god with a thirst for blood and destruction.

In Aztec mythology, Tepoztecatl or Tezcatzontecatl (you can listen to how it is pronounced

here– good luck with that!) was the god of drunkenness and fertility. Tepoztecatl was one of the Centzon Totochtin. One of four hundred children of Mayahuel, the goddess of the maguey plant, and Patecatl, the god that discovered the fermentation process. As the story goes, the Goddess of Flowers, Xochitl, gave some pulque (fermented agave) to the King of Tula, who got drunk and raped her. Because of the rape, Mayahuel became the new Goddess of Pulque (and prostitutes). According to the myth she had 400 breasts that all gave quality fermented maguey sap. The 400 children were pictured as rabbits, which she nursed with this alcoholic beverage and were therefore referred to as the Gods of Drunkenness. According to the legend they would gather on a regular basis to test their livers. As with many of the other gods, he is also associated with fertility. Tepoztecatl had a very specific job. As a fertility deity, you would call upon him if you were looking for a night of wild, uninhibited, carnal copulation. His job was to help you get so drunk that even the most hideously ugly people will begin to seem alluring and delightful.

Which one of these gods strikes a chord with you? Although Bacchus and Dionysus are much more popular, I  think I have little special place in my heart for Shezmu. Are you aware of another religion’s god of wine that I didn’t mention? I’d love to hear about them.

I recently posted about the Women of Wine.  I know that by the title you would think that it was about women in the wine industry, and although that in itself is a great topic, I am known for not always seeing things the same way as most went a different route. I always tell my students,…

This month’s MWWC blog entry is all about  I had the distinct honor of winning last month’s contest on “Values” which allows me to choose the next topic. Considering I read all of the other spectacular blog entries, I have a strong suspicion that one of the main reasons I won is because of my…

Bill Kerr and Andy Wahl may not have known each other their whole lives, but once they met in Sonoma, they realized they were destined to be friends. With similar appreciations of the outdoors, storytelling, patriotism & great wine, they created Ammunition Wine as a tribute to the American way of life.  Together, they decided to…

With Mother’s Day being tomorrow, I thought I would depart from the typical blog about wine.  However, I’m not really wandering too far, because without the support of my mom and dad, I would not have the courage to take on new endeavors. So in part, Dracaena Wines coming to fruition is because of them….