Most people love fall colors.  The oohs and ahs as the leaves change colors and the 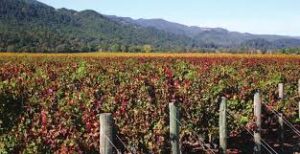 season’s change drives an amazing tourist industry. People travel to the North East to see these colors.  Hotels revel in the peak color time because they can charge more per night for their rooms.  In deciduous trees (those that lose their leaves), leaf color change is triggered by the amount of chlorophyll in the leaves and the length of daylight hours. (see, there I go again being a biology nerd) But in Vitis vinifera, that red color that people ogle over is actually a serious disease, not the changing of the seasons.

[bctt tweet=”Grapevine Leafroll disease is one of the more difficult diagnoses to make on Vitis vinifera. “]The difficulty to recognize the disease comes from the fact that its symptoms, if present, vary depending on cultivar, it rarely shows up until the season is already underway and there are other conditions that mimic GLD.  Grapevine Leafroll is one of the most economically devastating diseases that can affect the vineyard.

What are the Symptoms of GLD?

Symptoms vary depending on varietal and often begin to develop in late August or early fall. Typically, the veins of the leaf will remain green while the leaf tissue itself turns deep red to an almost purple color in red varietals and yellowish in white varietals.  The leaf margins begin to curl or cup as the disease progresses. These symptoms tend to be more pronounced on shaded sides of the vine and during cooler growing seasons.

Interestingly, American Vitis species and French-American hybrid varieties (Vitis labrusca L. ‘Niagara,’ Vitis x labruscana L.H. Bailey ‘Concord’ and ‘Catawba,’ V. labrusca x V. riparia Michx. ‘Elvira’) have been determined to be carriers.  These varietals can harbor the virus without showing any symptoms. However, if these hybrid varieties are planted near Vitis vinifera vineyards, the disease can easily be transferred to these vines.

[bctt tweet=”There have been ten different viruses that are recognized as Grapevine Leafroll-Associated”] Viruses (GLRaVs.) The clever scientists that have discovered these individual viruses came up with the very original names of  GLRaV-1 through GLRaV-10, based on the order of their discovery. Additionally, two members of the scale insect family, mealybugs and soft scales, have been shown to transmit GLRaVs between vines, and in some cases, between nearby vineyard blocks. These are soft-bodied, wingless insects that can be viewed as white cottony masses on the leaves, stems and fruit of plants. They feed by inserting long sucking mouthparts.

How to manage a vineyard against Grapeleaf roll disease.

Currently there is no cure for an infected vine. Prevention is the key. Management begins with planting a healthy rootstock.  Vineyard managers need use only stock that has been certified to be free of leafroll virus. Only plantings that are directly from a certification facility are legally able to be called “certified virus-free.”  Once a vine is infected, the best bet is to remove and destroy the infected vine.  This is a difficult thing to do financially, however, waiting may cause the disease to spread to nearby vines and cause an even more economic impact.  Three options open to the vineyard manager once the vines are infected are:

1- Full replacement of the vineyard. If a grower chooses to replace a vineyard, it is critical not only to make sure that virus-tested cuttings are used in the replanting, but also that the entire root system of the infected plants has been removed. If roots remain, suckers can form and grow, which may provide a source of virus inoculum for replanted cuttings.

2-  A very poor cost effective option is roguing or selectively removing infected vines. Depending on the case, this may be an option, but it is more like placing a band-aid on an injury. The injury is still there, but you just can’t see it.

3- The option to do nothing is always there. However, the vineyard manager needs to realize that his decision can impact his neighbors. If the infected vines are retained in a vineyard, they serve as a potential source for the secondary spread of the virus within a block and a source of infection for neighboring vineyards.

No matter what option is decided upon, being observant in the vineyard is a a major management directive. During day to day activities, monitoring and controlling mealybugs and soft scales populations is mandatory.

Leafroll disease has been found in every major viticulture region in the world. Leafroll disease’s impact is not instantaneous.  Loss from leafroll in a single year is usually not catastrophic. The reduced yield and decrease in quality of fruit continues year after year over the life of a vineyard. This is where the economic impact is felt the most. Over the course of years it can be quite significant. A 10% loss in one year may not sound so devastating, however it has been estimated that leafroll affected vines have reduced yields of up to 50%. Now that is catastrophic. [bctt tweet=”Vines affected by leafroll disease are less vigorous and more susceptible to winter injury. “]Because leafroll damages the phloem (the vascular tissue in plants that conducts sugars and other metabolic products) of infected vines, sugar accumulation is delayed causing lower than expected brix levels. Anthocyanin production is reduced, and the fruit from infected vines will be poorly colored and late ripening. 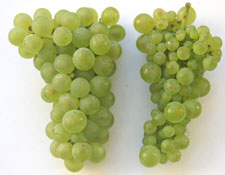 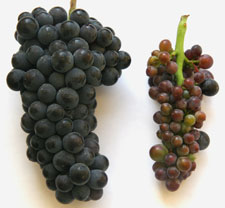 During Mike’s and my last trip to Napa, we were astonished at how many acres of vineyards were effected by this horrible disease.  It has reached the point that many of our favorite wineries have decided the vines were not producing enough and they no longer had a choice, they had to rip them up and place in piles to burn.  The economic impact is unfathomable. Sadly, in this case, although beauty is in the eye of the beholder, in this case, what is beautiful to one person is an economic crisis to another. 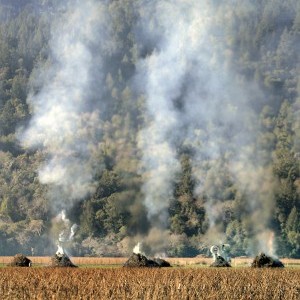 I guess you can take the girl our of science (since I now teach Physical Education) but you can’t take the science out of the girl.  My undergrad and graduate degrees in Biology and the way too many years as a microbiologist are ingrained in me.  Although I don’t deal with science on a day…

Alright, admit it, who clicked on this link solely by the title thinking you were going to read something straight out of 50 Shades of Grey?  Well, sorry to disappoint, but I hope you continue to read on. There is no gray tie here, just a vine- the grapevine. How many of you have been in…

How many times have you sat down with a great glass of wine and read on the label that it was made of a specific clone? Have you read an article about hybrids and wondered what the heck that meant? How about crosses? Well, you may remember them from your high school Biology days, but…

Cooperage, what the heck is it? It is a cool name and it’s even a cooler job.  If you love wine, you need to learn the science behind the wine barrel.  Have you ever watched the show, How It’s Made on the Science Channel or Sport Science on ESPN?  I love shows like that.  I am…

Cabernet Franc is often used as a blending grape.  Many people have heard of it, but not too many have had the pleasure of sitting down with a glass of it as a stand alone varietal.  That in  itself is a shame, because Cab Franc is worthy of the spotlight.  The number one question when…