I don’t know about you, but I was under the impression that Biodynamics was relatively a new concept. But it has been around for quite some time.  It is an approach to agriculture that was developed by a philosopher named Rudolf Steiner (1861-1925.) In addition to creating Biodynamics, he is also the father of the spiritual-scientific approach to knowledge called “anthroposophy.”

Nostradamus may be known for predicting the future (or more precisely the end of the world) but he had nothing on Rudolf Steiner. He predicted that western civilization needed to master an understanding of the relationship between the spiritual and physical world, or else through its actions, would be responsible for the destruction of the earth.

He may not have had the prose that Elton John had as he wrote “The Circle of Life,” but he was the first to describe it. He preached that there was a link between what connected humans to animals and them to the plants and ultimately the soil in which they grew. He recognized that we were in a chess game of our lives and that every move had a counter move that had earthly influences.

What do you do when you are a fanatic for history and philosophy? You travel the world, learn to make wine in Beaujolais and return to your home state of Oregon to settle down and make exceptional wines dedicated to holistic farming and winemaking. This was the life of Jimi Brooks, the founder of Brooks Winery. He believed in a simple concept; his winery was going to be regenerative rather than degenerative.

The winery is located in Eola-Amity Hills, a sub-region of the Willamette Valley. Located just an hour’s drive from both Portland and Eugene airports, the region is easily accessible.

The Eola-Amity AVA, founded in 2006, is completely within the Willamette Valley AVA and is relatively large stretching about 15 miles long by 6 miles wide. It is contained between the city of Amity (not the one from the horror film; that honor belongs to a home on Long Island, way on the opposite coast) to the north and Salem (again, not the famous one) to the south.

The region is marked by the winds that come off the Pacific Ocean and travel through the Van Duzer Corridor. These winds lower the summer temperatures in the AVA allowing the fruit to enjoy a longer hangtime.  The hills themselves were named after the Greek god of wind, Aeolus. There are almost 40,000-acres within the AVA and there are approximately 1,300 acres of planted vineyards.

Winemakers always talk about allowing their fruit to express the terroir. It’s like the officials at sporting event. They are there to regulate the game, not influence it. Winemakers, although they have a style, they are not there to manipulate the fruit, rather to allow it to shine.

Although all vines are influenced by their soil and environment, it is often said that no other reflects their surroundings as much as Pinot Noir. The vineyard soils of the region include residual sediments from the Missoula floods as well as  volcanic and Nekia soils (composed of marine sediments and alluvial deposits) and over ancient basalt beds. The thin soils often provide wines that are higher in acidity, fuller bodied and a bit bolder than other AVAs in the Willamette Valley.

Unfortunately, Jimi passed away in 2004 at an early age from an aortic aneurism. But the Willamette Valley wine family came together to support his family and the winery. A dozen winemakers harvested the fruit and made the wine for Brooks Winery’s 2004 vintage. (This incredible act of kindness was turned into the 2014 award-winning documentary American Wine Story.)

After that vintage, his sister, Janie, managed the winery. At the time, Pascal, Jimi’s son, was just 8 years old. The following vintage Janie hired, Jimi’s long time friend, Chris Williams to be the winemaker.

Fast forward to 2019, Pascal is still carrying on his father’s legacy and passion. As the sole owner of the winery, he along with his aunt and father’s friend, continue to produce award-winning biodynamic wines in Willamette Valley. They acquired their biodynamic certification through Demeter in 2012. Williams farms twenty acres,  has introduced native plants, maintains an insectary and propagates a medicinal herb garden to allow Brooks Winery to prepare their compost teas.

In my glass, the wine poured a brilliant pale ruby in color. Wonderful aromas of cherry, strawberry and rose petals emanated from the glass. On the palate cranberries, strawberries and a perfect touch of herbs. The finish is medium with a nice acidity that carries the flavors just long enough for you to crave another sip. (SRP: $54)

I had some difficulty deciding what to pair with the wine. It was not the fault of the wine, rather the fact that the most common suggestions had ingredients that I do not eat. I used my trusty Coravin to sample the wine and as I mulled over the wine,  I thought about the nuances of the Pinot and thought that smoked Gouda would be a nice pairing. The wine was way too impressive to just put some cheese on a plate and call it a day, so yes, I created an entire meal around on ingredient. Does anyone else do that?

Once I decided on the main ingredient, I went to the store and stood in the cheese section. With my smoked Gouda in hand, I started thinking about what other ingredients would compliment the wine. Being the carbohydrate fanatic that I am, I knew my base would be pasta, so it was a matter of vegetables. Just a mere, $11 later, I was armed with my ingredients and ready to cook.

The recipe can be found on my second website, Wine Pairing with Dracaena Wines. 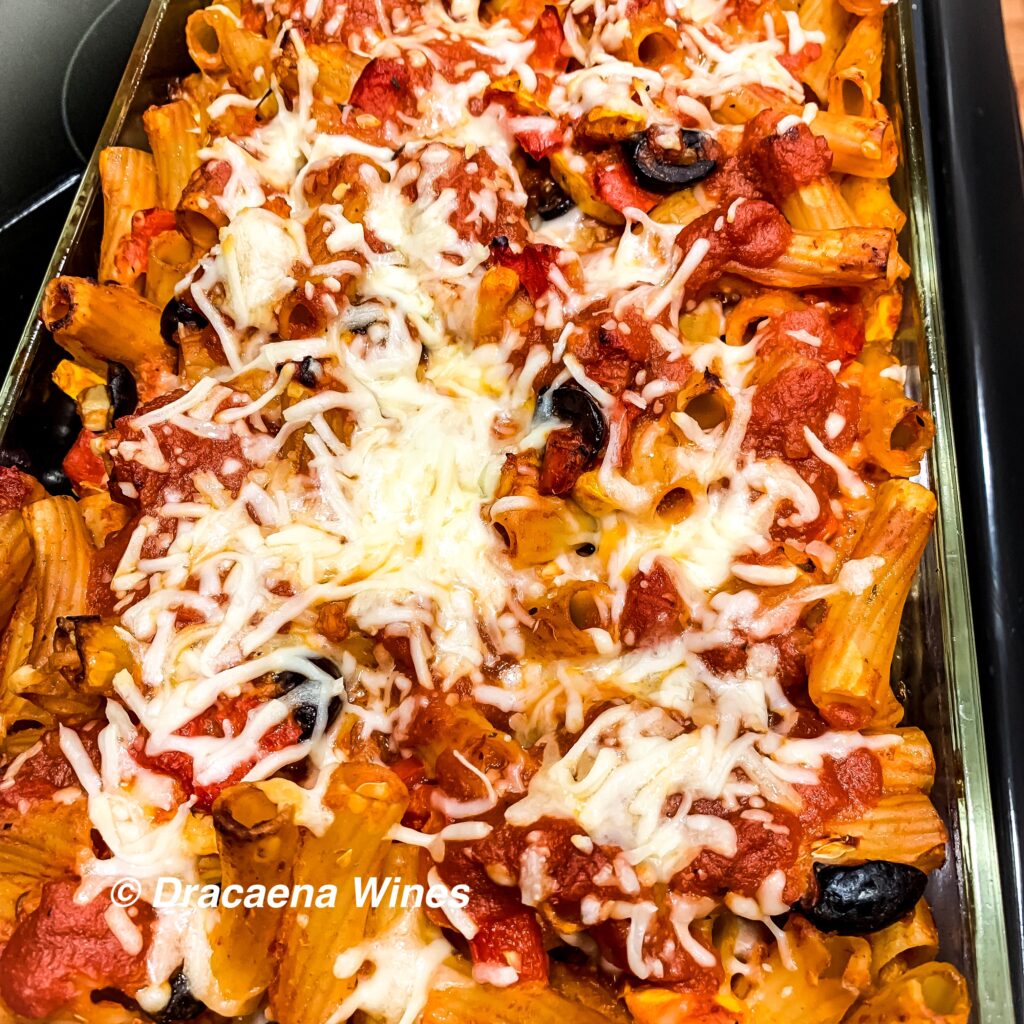 In the end, I must admit, it was a fantastic pairing. It did what a pairing is supposed to. The wine itself was delicious, the food was wonderful, but together they complimented each other and provided an elevated palate experience. 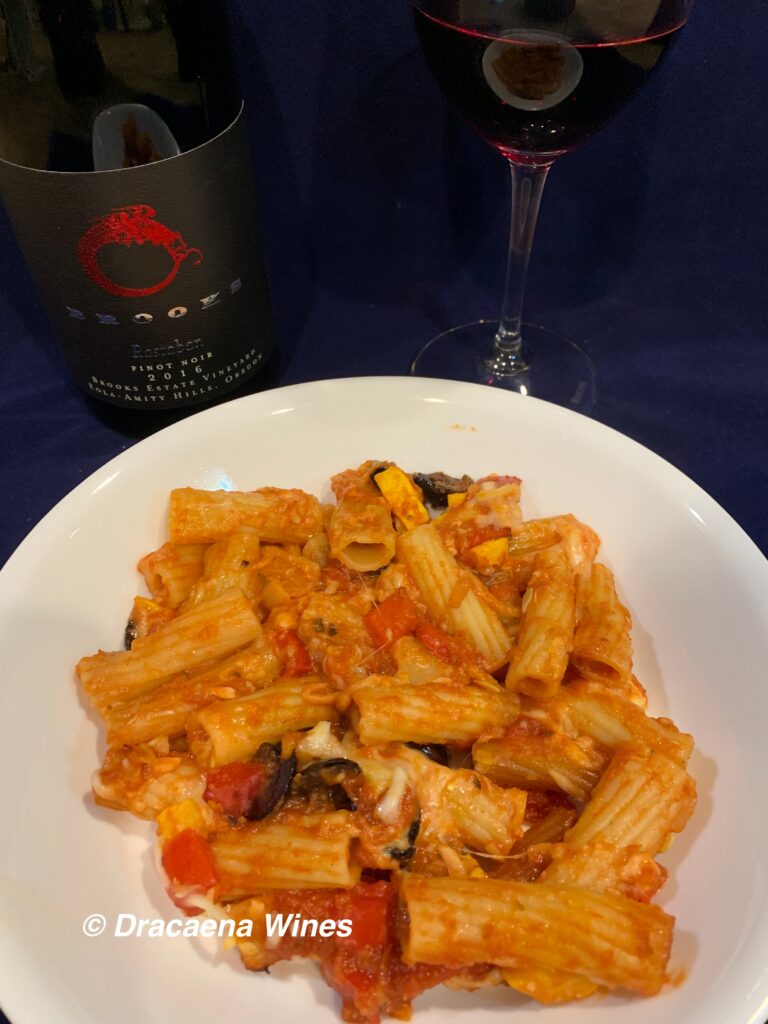 If you would like to learn more about Brooks winery and about biodynamic farming practices, my friends at #winePW will be chatting it up on Saturday, May 11th on twitter at 11am ET. In the meantime, check out Brooks website in order to purchase their wines.
If you can’t join the chat, don’t worry, you can learn all about the wines by reading my friends posts. I guarantee there will be amazing food pairing suggestions that will make your mouth water.

Here is a sneak peak of the dishes and wine pairings that are in store. These recipes will go live this Saturday May 11th during our Twitter chat scheduled 8-9 am PT. Follow #winepw as we discuss the behind the scenes of our recipe pairings and share thoughts on these amazing wines.